We Need A Committee To Investigate Black Stars' Loss—Prez Mahama 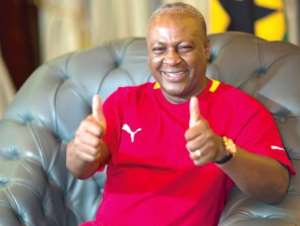 President Mahama has emphasized the need to establish a committee to investigate the circumstances that led to the elimination of the Black Stars from the World Cup Tournament.

The Ghana Black Stars failed to make it past the first round at 2014 World Cup after they were defeated by Portugal in their final group game.

According to him, the decision to fuse the old players with the new ones partly contributed to the loss.

'Often you get to a junction where you have a new breed of players coming up and you have senior players and you try to weld them together. Sometimes the welding leads to very great success but sometimes too it leads to a few problems,' the President explained.

President Mahama also called for a rebuilding of the team saying 'let's rebuild, let's do a post mortem and see what went wrong and see what we could have done better and fix it'

While urging the nation to take heart after a disappointing loss, President Mahama also asked Ghana to continue to support the team even in their loss.

The President believes that Ghana will make it in the future even though it could not sail through this year.

Many say the Black Stars off pitch issues led to their defeat in a match they were expected to win easily.

The team had threatened a boycott of Thursday's match if their appearance fees were not paid on time.

This led to the government of Ghana airlifting three million dollars to Brazil to pay the team. The airlifting generated anger back home and became news across the world with some questioning the reason to fly the cash when the nation's economy was struggling.

Some also say the sacking of two of the teams senior players reduced the morale of the players and led to the defeat.

It is unclear when this committee will be formed but Ghanaians are already questioning its use. They say many such committees have been established at the taxpayers expense but have failed to result in any change at the Ghana Football Association and the Ministry of Youth and Sports.