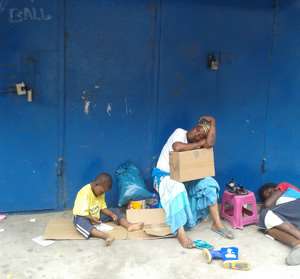 A Kayayei sleeping in front of one of the closed shops

The three-day strike action embarked upon by members of the Ghana Union of Traders Association (GUTA) to compel government to address their concerns enters its third day in Accra and Kumasi today.

The move by the traders has adversely affected many shoppers in the two regional capitals, with many descending heavily on government for its insensitivity to the plight of local traders.

The Ministry of Trade & Industry accused GUTA of acting in bad faith, but GUTA said its members voluntarily decided to embark on the strike action due to their plight.

Outgoing Deputy Minister of Trade & Industry, Nii Lante Vanderpuye, on Tuesday blamed GUTA for the development, saying there had been broad discussions with GUTA's leadership on how they could present a blue-print to Government to deal with their concerns.

'If anything at all, they should have reverted to me to say that these issues we discussed with you, we have not seen any move on them, and then I will know what to do. I have been waiting for them to bring to me the proposal they discussed. I haven't heard anything from them.'

About 90 percent of shops belonging to GUTA members in Accra and Kumasi have been closed since Tuesday.

GUTA took the action to protest against the illegal retail activities of foreigners in Ghana and government's refusal to enforce the country's laws.

They have appealed to government to stop the activities of foreign retailers, saying 'we are already suffering and so allowing foreigners to take over jobs from the local people will make matters worse.'

According to Joseph Paddy, Public Relations Officer (PRO) of GUTA, foreigners are still competing with local traders in the retail sector despite several calls to government to address the situation.

He said government must ensure that non-Ghanaians respected the laws of Ghana.

The Mayor of Accra, Alfred Okoe Vanderpuije and personnel of the Ghana Police Service, on Tuesday, went round the business district of Accra to announce to traders to transact their business.

However, only petty traders have been conducting business since Tuesday while the shops remain closed.