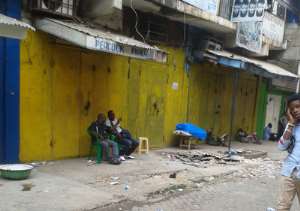 Some of the closed shops
Almost 90 percent of shops belonging to members of the Ghana Union of Traders Association (GUTA) in Accra and Kumasi were closed yesterday in protest against the activities of foreigners in the country's retail sector.

A visit by BUSINESS GUIDE to the Central Business District of Accra and other market centers in the metropolis, as well as markets in Kumasi confirmed the development.

Most shops were closed in markets at Tudu, Makola Shopping Mall, Mallam Atta, Accra Newtown, Kaneshie, Okaishie and Kantamanto when this paper visited the areas.

Members of GUTA have agreed to close their shops for three days to protest against the illegal retail activities of foreigners in Ghana and also the failure of government to enforce the country's laws.

Some GUTA members were seen discussing the matter in groups at the frontage of their closed shops, while petty traders displayed their wares on the pavements.

The stranded shoppers hurled insults at government for not doing anything about the plight of the shop owners.

Some of the traders, who spoke to BUSINESS GUIDE, said they would not open their shops until Friday, stating that 'we are all worried about the activities of the foreigners in the retail sector. They are killing our business.'

They appealed to government to sack the foreigners, adding that 'we are already suffering, and allowing foreigners to take over jobs from the local people will make matters worse.'

Joseph Paddy, Public Relations Officer (PRO) of GUTA told this paper in an interview that almost 100 percent of shops belonging to their members were closed.

'We did not impose the directives on them but out of their own free will they decided to adhere to it because the issue at hand worries them too. Their compliance means they support the cause we are fighting for.'

Paddy indicated that 'the foreigners have almost taken over the services sector and now they want to take over the retail sector reserved for Ghanaians only. Now it looks like we are strangers in our own country. We will not allow this to happen.'

He added that his outfit was poised to ensure that non-Ghanaians respect the laws of the country.

Some petty traders also informed this paper that the Accra Mayor, Alfred Okoe Vanderpuije and personnel of the Ghana Police Service, earlier in the day, went round the business district to announce to them that they could transact their business without fear of being harassed by anyone.

From Kumasi, Ernest Kofi Adu reports that the angry traders, who wore red armbands, told this paper that government had disregarded their complains about recent increases in import duties.

More than 1,000 traders reportedly observed the strike in Kumasi, the nation's second largest city with close to five million people.

Kwame Breyah, an executive of GUTA in the Ashanti region, who is also the chairman of Spare Parts Dealers Association, noted that the depreciation of the cedi against major currencies had negatively affected the traders' nightmare, eroding their capital base and business plans.

Ministry's reaction
Meanwhile, the Ministry of Trade and Industry has accused the GUTA of acting in bad faith.

According to outgoing Deputy Minister of Trade & Industry, Nii Lante Vanderpuye, there had been extensive discussions with the leadership of GUTA and they agreed to present a blue-print to deal with their concerns.

'If anything at all, they should have reverted to me to say that these issues we discussed with you, we have not seen any move on them, and then I will know what to do. I have been waiting for them to bring to me the proposal they discussed. I haven't heard anything from them.'