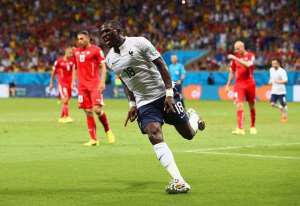 Didier Deschamps' side have displayed superb form so far in Brazil, comfortably seeing off 10-man Honduras 3-0 before hammering Switzerland 5-2 to all but secure a place in the last 16.

France now require only a point against Ecuador in the Maracana on Wednesday to finish top of Group E and guarantee progression to the next stage.

And Sissoko, who was on target in the win over Switzerland, is optimistic when it comes to assessing the prospects of French success.

"We've been regularly improving our standard since the second leg against Ukraine (when France overturned a 2-0 first-leg deficit to win a qualification play-off 3-2)," Sissoko told FIFA .

"Since then, we've realised we have the qualities to achieve something great, and that's what we're now showing the world.

"We've played two good matches with lots of goals, good combinations, solid work at the back and great attacking moves.

"We'll try to play the way we have since the start of the tournament and remain united on the pitch. If we can do that, France can go very far."

France have featured in two of the last four World Cup finals, winning the competition in 1998, but suffered group-stage exits in 2002 and 2010.