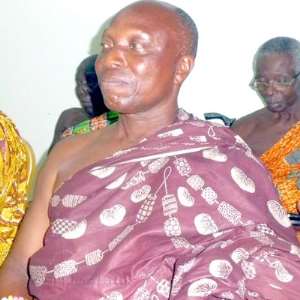 Togbe Anikpi III
In an effort to water down agitations by the chiefs and people of the Volta Region and also prevent a massive demonstration to be held by the inhabitants of the Asogli State in Ho, the Volta Regional capital, President John Dramani Mahama paid an unannounced visit to the region on Sunday.

The visit afforded President Mahama the opportunity to make more promises and give more assurances regarding the very reasons why the Asogli State, with support of the chiefs and residents across the region, had intended to embark on the demonstration.

Sources close to the Office of the President confirmed to DAILY GUIDE that the proposed demonstration, which had the backing of Togbe Afede XIV, the Agbogbomefia of the Asogli State and President of the Volta Regional House of Chiefs, had sent strong signals to President Mahama, hence, the surprise visit.

A source said, 'Our people (Volta Region) are not happy and we cannot allow the demonstration to take place because it will not be good for the current situation and the National Democratic Congress (NDC).'

He added that 'the old man's (President's) coming is to save the situation and find some solutions to the challenges facing the people.'

Demo
During a brief meeting at Togbe Afede's palace, the chiefs did not mince words as they threatened to embark on a massive protest with their subjects on Wednesday in Ho, if they did not see concrete signs of government's commitment to address their concerns.

Speaking on behalf of the Asogli State, the Chief of Ho-Heve, Togbui Anipki III said, 'We are determined to go for the demonstration…come Wednesday. It is going to take place if we do not see any sign that work has resumed on the Ho-Adidome-Sogakope roads.'

That notwithstanding, the youth in Ho and other parts of the region have also served notice to the chiefs not to back down. According to the youth, 'come what may, we are going to embark on the demonstration.'

Second Class Citizens
Togbe Anikpi expressed the worry that the region had been neglected and that, 'We have observed that the people of the region have for far too long been taken for granted.' This sentiment, DAILY GUIDE sources said, cut across the region.

'Are we not part of the country or is it because the region is considered as 'World Bank' [during elections], meaning come what may – whether our needs are catered for or not – you are sure of our votes and therefore no serious attention is being given to development projects here…?' he queried.

He said, 'People say work is going on but we the people on the ground are not seeing anything,' adding that 'we will persist until we get what we want.'

Afede Backs Demo
Togbe Afede XIV agreed to the sentiments and added that 'these are the realities on the ground.' He was not happy that the traditional leaders were being blamed by the residents for being insensitive and 'for doing nothing' to ensure that government fulfilled its promises.

He expressed gratitude to the President for his good intentions towards the region and cited the University of Health and Allied Sciences (UHAS) and the proposed aerodrome among others as some of the well-intentioned projects of Mahama.

Mahama Begs
President John Mahama
The sweet-mouthed President assured the region that his administration would never take them for granted saying, 'Let me assure the people of the Volta Region that …I will never take you for granted.'

President Mahama articulated: 'I am very pleased that I came here today and I am very appreciative of your frankness in talking about frustration. It doesn't anger me; it rather lets me understand that there is more that we should do to make our intentions known…'

President Mahama explained that despite the myriad challenges facing the country, government was undertaking a lot of development projects.