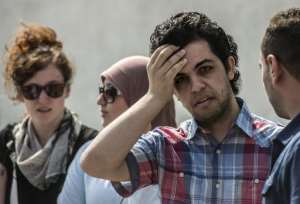 The pan-Arab news channel has come in for strong criticism in Egypt over its coverage seen as favourable to the Muslim Brotherhood, the movement of ousted Islamist president Mohamed Morsi.

Three of its journalists, including award-winning Australian Peter Greste, each got seven years in jail by a Cairo court, accused of supporting the blacklisted Brotherhood, a verdict condemned around the world.

Eleven defendants tried in absentia, including one Dutch and two British journalists, were given 10-year sentences.

Al-Jazeera described as "unjust" the verdicts, which come with tensions high between Doha and Cairo, which accuses Qatar of supporting Morsi's Brotherhood.

Qatar had condemned Egypt's crackdown of the Brotherhood's supporters in the wake of the army's ouster of Morsi in July 2013, following huge protests against his single year of turbulent rule.

Al-Jazeera had dedicated its Mubasher Misr live channel to cover protests against the military-installed government in Cairo.

For years the network provided a forum for opponents of authoritarian regimes in the Middle East and North Africa, and gave intense coverage of 2011 uprisings in Tunisia, Egypt and Libya that overthrew veteran strongmen.

Analysts say Monday's verdict reflects the tensions between Qatar and Saudi Arabia, a staunch Brotherhood opponent which withdrew its ambassador from Doha this year in a move emulated by Bahrain and the United Arab Emirates.

The Gulf powerhouse had urged Doha to curb Al-Jazeera's coverage, judged in favour of Islamists in Egypt and elsewhere in the Arab world.

"This is a media war between Qatar and Saudi Arabia," said Palestinian columnist Abdel Bari Atwan.

"Some defend Islamists, others are against (them)," he said of the diplomatic crisis between Doha and its Gulf neighbours.

Al-Jazeera's critics consider its editorial line too favourable for Islamists, and see it as a voice for Qatar, which has denounced the deadly repression of Islamists in Egypt after Morsi's ouster.

"Al-Jazeera, which was the voice of the voiceless, has sided after the Arab Spring with certain political groupings, like the Brothers in Egypt and (the Islamist party) Ennahda in Tunisia," said Kamel Labidi, a Tunisian freedom of the press activist.

"This has damaged its objectivity and impacted its image in the region," he said.

Others argue, however, that Al-Jazeera is just doing its job by reporting events.

"It remains daily at the core of media that follows the process" of change in the Arab world, said Sorbonne professor Mohamed El Oifi, condemning Egypt's "will to silence Al-Jazeera".

"In Egypt, Syria and Iraq today, it continues to give voice to the forces that push for political change to the dismay of supporters of the status quo, stability and the counter-revolution," he said.

And it is unlikely to disappear, said UAE professor of political science Abdel Khaleq Abdullah.

"Though declining, Al-Jazeera remains a major Arab television as it has kept its popularity," he said.

The network has been in trouble in the past with Arab regimes that often accused it of having set agendas in its coverage.

Washington has in the past accused Al-Jazeera of being a mouthpiece for extremist groups, especially since it almost exclusively aired video messages of the now slain founder of Al-Qaeda, Osama bin Laden.

Al-Jazeera established its reputation through almost exclusive coverage of the first days of the war in Afghanistan in 2001.

It has more than 65 offices around the world, a global network of some 400 journalists, 24-hour English and Arabic news channels, a documentary channel, a children's channel and more than a dozen sports channels.

Its main competitor in the Arab world is the Saudi-owned Al-Arabiya network.