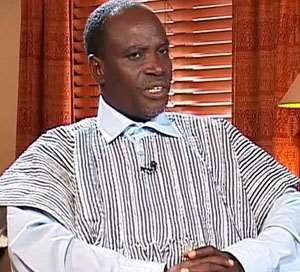 Moses Asaga, NPA Boss
Parliament has summoned the National Petroleum Authority (NPA) to justify the payment of $63,000 per month as rent for its new office at East Legon, Accra.

The Minority in Parliament blew off the NPA's cover at a news conference last week when they accused the government of profligate spending at a time when there is almost an economic crunch.

The Mines and Energy Committee of Parliament chaired by Dr. Kwabena Donkor, confirmed the invitation on Joy FM and said the NPA should be made accountable if the rent did not give what he called 'value for money.'

He told critics that they should also be curious about 'the floor space, as well as price per square meter'.

Dr. Kwabena Donkor said after 10 years of existence, the NPA should be in a position to have its own office building.

Ministry's 'Anger'
The Ministry of Energy and Petroleum has issued a statement, 'agreeing' to concerns raised by the public on the high cost of the NPA's rent.

A statement signed by Ras Liberty Amewode, Deputy Head, Communications at the Ministry quoted sector Minister Emmanuel Armah-Kofi Buah, as saying 'If the NPA's office was rented at $63,000 per month as has been reported, then that hardly represents prudent use of state resources, no matter how conducive or appropriate the facility is for their operations.

'The Minister would be demanding from the Board and management of the NPA an explanation for such a decision, 'especially the consideration that went into a decision that runs at variance with the philosophy and preferences of His Excellency the President as far as the use of public funds are concerned,' the statement further quoted the Minister.

The statement assured the public that the ministry was doing 'everything possible' to get to the bottom of the matter.

NPA's Justification
The NPA has been justifying its action since the NPP broke the news.

A spokesperson for the NPA, Yaro Kasambata, justified the amount, describing it as 'necessary and urgent,' on Citi FM's Eyewitness News last Friday.

He said the NPA relocated from Cantonments, Accra, to East Legon because it had the safety of its employees at heart.

'After a period of time it's overburdened to accommodate over 200 employees of the Authority, thus contributing to the problem,' according to him.

He revealed that the Authority, as a means of cutting cost, intended to sublet a section of its present facility to another tenant in order to recoup its money.

Asked whether the amount of money spent on the NPA's accommodation was a prudent use of resources, Mr. Kasambata responded that 'it was a reasonable decision.'