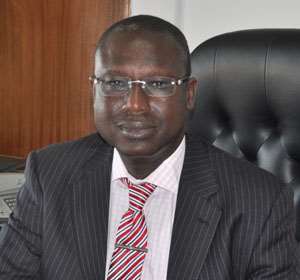 William Hutton Mensah, ECG Boss
The Electricity Company of Ghana (ECG) has been called upon to urgently put its house in order to assure the investor community that it is committed to fulfilling its financial obligations to Independent Power Producers (IPPs).

Africa Centre for Energy Policy (ACEP), which gave the advice in a press statement signed by Mohammed Amin Adam, its Executive Director, said many IPPs, who signed agreements with ECG, have not been able to justify the credibility of ECG as an off-taker to support the raising of capital.

Power supply deficit in the Africa region alone stands at an estimated 100,000MW, which could encourage floating power stations to invest in many other countries as a short term measure to provide the needed power to cushion their demand.

ACEP urged ECG to make its recent arrangement with Karadeniz Holding, a Turkish power producer, a reality to help improve the power situation in a short timeframe.

'But again ECG should realize that its own credibility deficit explains why many Power Purchase Agreements (PPAs) never materialized.

'Even though the Energy Commission is supposed to approve the Power Purchase Agreement, they are not aware of ECG's arrangement with Karadeniz Holding. This is not the best way of handling a crisis of this nature and only highlights certain disjointedness in the institutional arrangement in Ghana.'

It further mentioned: 'ECG cannot also default in paying the generator from the floating power station, as has been the case with current generators. The credibility of ECG as the off-taker is fundamental to the sustainability of the mobile power system. The fact that the generator is floating on the sea means that if the investor is dissatisfied, the obvious option is to look for another market that is willing to meet financial demands of the generator. This could result in the ship moving to other countries that are willing to pay for power if ECG reneges on its financial commitment to the generator.'

The Turkish company has agreed with ECG to supply 450mw of power to the grid annually for a 10-year period. Karadeniz Holding is a reputable power company in Turkey with a track-record of supplying power through floating ships which berth onshore.

The floating power stations have reasonably short gestation period (conception to first power) and it is estimated that the company could supply power to Ghana early next year, which deviates from conventional gestation periods of three-four years for onshore thermal power systems.

'ACEP's policy recommendation throughout the crisis period has been a clear strategy to increase generation through investment attraction and institutional reforms that present the utilities as credible entities capable of meeting their commitments to investors and consumers.

'The arrangement with a Karadeniz Holding is a plus to investment attraction to the sector. What remains skeptical is the institutional capacity to make the arrangement sustainable.'