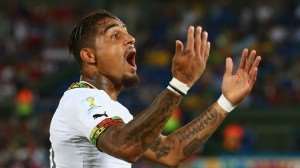 Ghana defender John Boye and midfielder Kevin-Prince Boateng missed the Black Stars training session on Sunday night ahead of their Thursday clash with Portugal at the 2014 World Cup.

The duo were undergoing treatment after sitting out Ghana's training in Maceio on Sunday.

The duo featured in 2-2 draw with Germany the previous day but were excused from the team's training.

Boye suffered a shoulder injury during the Black Stars exciting 2-2 draw against Germany.

Boateng received a knock in the match against the Germans which prompted his exclusion from training.

Ghana returned to their base just after the game to begin preparations for the final Group G game against Portugal on Thursday.