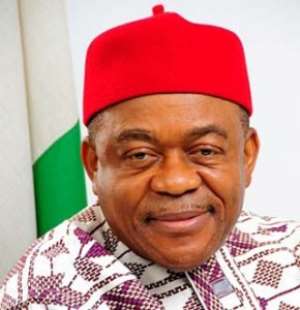 The Abia State Governor, Chief Theodore Orji, has congratulated the Peoples Democratic Party (PDP) governorship candidate in Ekiti State, Mr. Ayo Fayose, for his hard earned victory at the just concluded governorship election in Ekiti State where he defeated the incumbent Governor Kayode Fayemi of the All Progressive Congress (APC).

In a statement by his Chief Press Secretary, Mr. Charles Ajunwa, Governor Orji who expressed happiness over Fayose's landmark victory, thanked the people of Ekiti State for remaining peaceful during and after the governorship election.

Governor Orji who also thanked officials of the Independent National Electoral Commission (INEC), Police and other security agencies for the professional manner they discharged their duties, said the people of Ekiti State made the right choice by voting massively for the PDP candidate, Fayose.

The governor charged the people of Ekiti State to give Mr. Fayose all the needed cooperation and support to enable him realize his dream of taking the state to greater heights.

'Mr. Ayo Fayose's victory is a divine mandate. I know that the newly elected governor of Ekiti State has all it takes to bring the dividends of democracy to the people of the state. He has done it before and he will do it again.