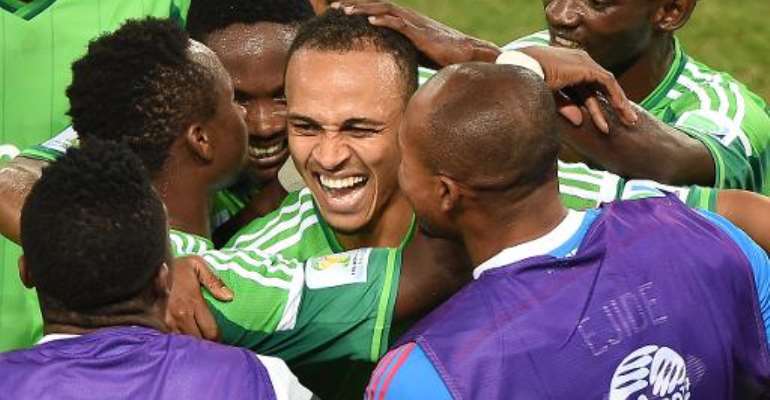 Nigeria forward Peter Odemwingie (C) celebrates with teammates after scoring a goal in their World Cup Group F match against Bosnia-Hercegovina at the Pantanal Arena in Cuiaba on June 21, 2014. By Luis Acosta (AFP)

Cuiabá (Brazil) (AFP) - Nigeria had the returning Peter Odemwingie to thank for delivering them their first World Cup win since 1998 and lifting them to the verge of the knockout stages.

The Stoke City forward struck in the first half to hand Nigeria -- held to a disappointing 0-0 draw by Iran in their opening game -- a 1-0 win over Bosnia in Cuiaba on Saturday to leave them on four points and in pole position to take the Group F runners-up spot behind already qualified Argentina.

Defeat for Bosnia saw them eliminated from the finals with one match remaining.

Born in the former Soviet Union to a Nigerian father and a Russian Tatar mother, 32-year-old Odemwingie had a spell in the international wilderness after a reported fall out with coach Stephen Keshi.

He was overlooked for the Nigeria squad that was crowned continental champions at last year's Africa Cup of Nations in South Africa.

But back on board for Brazil 2014 he repaid Keshi's faith in the 29th minute of Saturday's game when shooting past his Stoke teammate, Bosnia keeper Asmir Bergovic.

"I feel very happy to be back, playing for my fatherland, it's always a pleasure and an honour," the man-of-the-match said after the game in Cuiaba's Arena Pantanal.

"I couldn't have dreamt of a better comeback. I didn't expect to come back and score the winner.

"The coach had faith, and being back with my friends makes me happy."

Bergovic had sensed Odemwingie was going to prove a handful, telling a Stoke newspaper The Sentinel before the World Cup: "Peter will pose a great threat for sure, so we will need to be very aware of him during the game."

Odemwingie, born in Uzbekistan's capital Tashkent where his father was playing football, said while his goal was important to him what was more pleasing was the way the team as a unit performed in tricky tropical conditions.

This was a heartening result for Nigeria as it ended a nine match winless World Cup run and gave the country some positive news in a week that saw Muslim militant group Boko Haram blamed for a bomb attack that killed 21 people watching the Brazil game against Mexico on a big screen.

"I'm happy we won our first World Cup game since 1998, I hope this continues, I liked what I saw today," Keshi told the post-match press conference.

It was certainly a major step up after the 'Super Eagles' were lambasted back home in Lagos after the dreary goalless stalmeate against the Iranians.

But Keshi, who captained Nigeria to their first ever World Cup finals in 1994 where they reached the second round, took issue with that criticism from fans and domestic media.

"It happens in Africa nobody gives us a chance, they were saying the Iran result was the worst ever, then we saw Iran against Argentina (the Iranians lost 1-0 but only to a Lionel Messi winner in time added on), if the Argentines didn´t have Messi it would have been the same score line.

"I never had a doubt we wouldn't never make it as long as the players were ready to play. I felt the character the boys showed, it was better today, tempo was very high."

African sides had struggled to make an impact in Brazil up to Saturday, but this pleasing performance on the back of fellow West Africans Ghana's draw with Germany earlier in the day put a more favourable light on things.

"We won, and after Ghana it's good for our continent," remarked Keshi.

A draw for Nigeria against Argentina will suffice to seal their last 16 passage even if Iran beat Bosnia, though the South Americans have beaten them on all three previous occasions they have met at the finals.

Any other permutation and it will come down to goal difference.