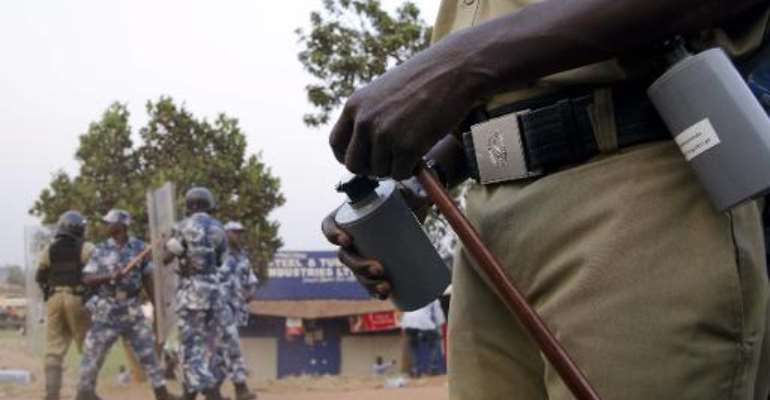 Kampala (AFP) - Police in Uganda said Saturday they were testing two piglets for "terrorism related material" after they were sneaked into the country's parliament by two anti-corruption protesters.

Seven police officers who were on duty outside parliament have also been suspended over the embarrassing security breach and detained on charges of neglect of duty, police deputy spokeswoman Polly Namaye told AFP.

"The investigators are to test the animals for terrorism related material. You never know, there could have been another motive other than a protest," she said. "This is a standard practice in investigations, leaving out no chances."

Uganda, which has troops in Somalia as part of the African Union force fighting Al-Qaeda-linked Shebab insurgents, is currently on high alert amid fears of attacks by the militants.

"In this era, every option must be explored. What is seen as a protest can be different, including terrorism, that's why these tests must be done to ensure there is not any other motive by these protesters," she added.

This week two men managed to sneak into the tightly guarded parliament and let loose two piglets. The men, Robert Mayanja and Norman Tumuhimbise, are members of a protest movement calling themselves the "jobless brotherhood group".

Officials said the protestors had painted the animals in the colours of the ruling party of President Yoweri Museveni, one of Africa's longest serving leaders, and had written slogans on the animals insulting MPs as corrupt -- including the word "MPigs".

On Friday, relatives of the men said they have been sent to prison awaiting trial on three charges of "criminal trespass, conspiracy to sneak piglets into parliament and interrupting parliament work."

The unemployed men were protesting at what they said was corruption and extravagant spending by lawmakers.

Uganda has been the subject of frequent criticism from foreign donors over allegations of rampant corruption, although protests in the country by Ugandans are rare.

Earlier this year, MPs caused a storm after it emerged they had demanded a massive raise in their salaries, already 60 times higher than most state employees, and that the country's chief auditor had complained deputies had failed to account for millions of dollars of expenses.

Minority MPs stage walk out on approval of deputy ministeria...
36 minutes ago

The Ministry dispatched personnel to ask DCOP Opare-Addo why...
36 minutes ago