I Don’t Know You And You Don’t Know Me—T.B. Joshua Addresses Fayose Rumour 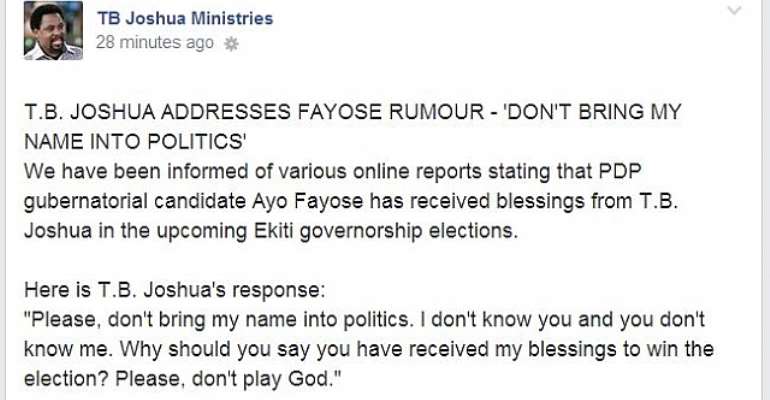 Prophet T.B. Joshua has lashed out at reports linking him with PDP's Ayo Fayose, stating that he has never met Ekiti State's former Governor and warning him to avoid 'playing God'.

Addressing the rumour published by several online news portals that Fayose received 'blessings' from the prominent cleric in lieu of tomorrow's controversial gubernatorial elections in Ekiti, Joshua took to his official Facebook page to debunk it.

"Please, don't bring my name into politics,'Joshua pertinently stated. 'I don't know you and you don't know me. Why should you say you have received my blessings to win the election? Please, don't play God."

The rumour initially started when Vanguard Newspaper published an article on April 4thtitled 'Fayose unfolds spiritual strategy' in which it was reported the former governor was 'eliciting the spiritual counsel' of Joshua.

Joshua came out strongly to denounce the article immediately, also using social media site Facebook, where the pastor boasts of over 1,000,000 followers.

'What is this stuff and who could have been spreading the false stories on my involvement in politics? This is not for the glory of God,' Joshua wrote in a post in April.

'If we want to come to church, we come for the salvation of our soul. We can play politics with everything but not with God, the Giver of our faith. I have never met former Governor Fayose before. What is all this?'

With the elections in Ekiti to be held Saturday 21st June 2014 eliciting controversial headlines, Joshua's name has been connected to Fayose once again, perhaps in an attempt to draw on Joshua's widespread popularity to gain more public support.

It is a fact the pastor clearly resents as evidenced by his second strongly worded rebuttal.