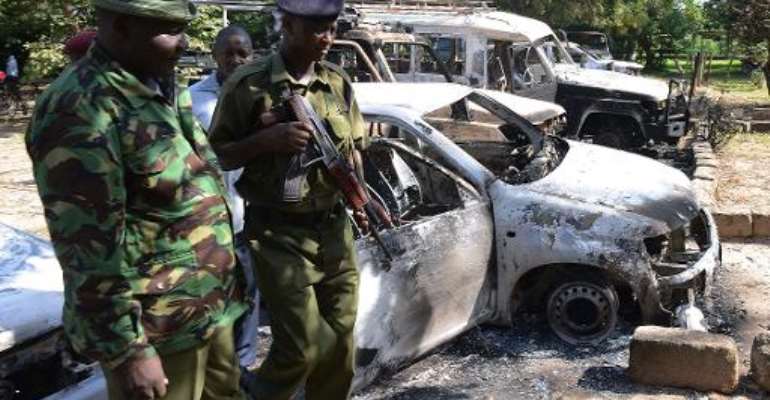 Kenyan police observe the remains of burnt-out cars at a police station in Mpeketoni, in the coastal county of Lamu on June 16, 2014. By Simon Maina (AFP/File)

In a statement released via Twitter, the ministry said there were five "suspected attackers shot dead while escaping", and that three AK-47 assault rifles as well as ammunition were recovered at the scene.

A senior Lamu county official confirmed that the Kenyan army had been deployed in the area following Sunday night's massacre in Mpeketoni, in which around 50 people were killed, and the attack in a nearby village the following night, in which officials say nine people died.

"There was a heavy operation in the area of Bodahai in Lamu county. The government deployed soldiers in that area in the morning," Lamu county's deputy commissioner, Benson Maisori, told AFP.

A military source said the five were killed by soldiers but that other suspected attackers had escaped. Reports from survivors and witnesses of the attack on Mpeketoni say the group numbered up to 50 militants.

"Others escaped after an exchange of fire with our men, but five were killed," the senior military officer said. "They were armed with AK-47 rifles and it is believed they were involved in the attacks."

The massacres were claimed by Somalia's Al-Qaeda-linked Shebab, although President Uhuru Kenyatta has instead blamed the carnage on "local political networks" along with an "opportunist network of other criminal gangs".

Shebab insurgents have claimed -- and carried out -- deadly attacks on Kenyan soil in the past, including last September's siege of the Westgate shopping mall in Nairobi in which 67 people were killed.

Several diplomats and analysts say they believe Shebab was in involved in the attack -- against a mainly-Christian town close to the tourist island of Lamu -- but with help from local sympathisers.

Survivors of the attack in Mpeketoni reported gunmen speaking Somali and carrying Shebab flags, executing non-Muslims and saying their actions were revenge for Kenya's military presence in Somalia as fight of the African Union force fighting the Islamists.

Kenya also has its own homegrown Islamist militants, as well as a coastal separatist group, the Mombasa Republican Council (MRC), but the tactics and extreme violence seen during recent attacks are unprecedented on Kenyan soil.

Kenya's police chief David Kimaiyo meanwhile announced that three people have been charged in connection with the massacres.

"We have arrested several suspects and already charged three in court," Kimaiyo said, adding that every effort was being made "to ensure all the suspects in this tragedy are brought to book".

He said police were still interrogating other suspects arrested over the killings.

The killings, as well as Kenyatta's contention that they were carried out by Kenyans, has prompted fears of fresh ethnic violence inside Kenya.

Bitter memories are still fresh in Kenya six years since contested 2007 elections escalated into ethnic conflict in which over 1,200 people were killed, violence for which Kenyatta and his deputy William Ruto face crimes against humanity charges at the International Criminal Court (ICC).