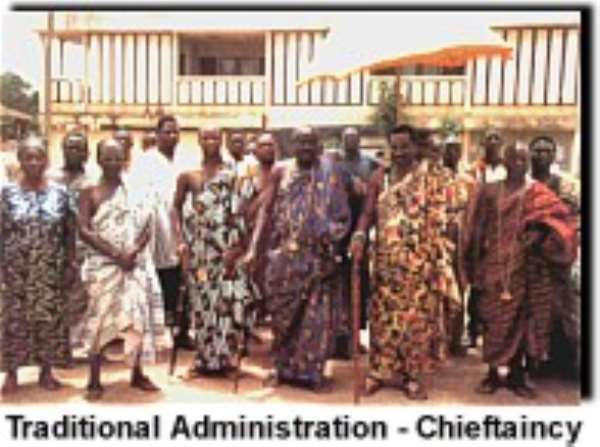 The first general meeting for this year that was called by the members of the Western regional House of Chiefs in Sekondi last Tuesday was thrown into a state of pandemonium with some of the chiefs raining unprintable words on each other, following an urgent motion that was moved by a member of the house.

Awulae Agyefi Kwame ll, the Omanhene of Nsein traditional area and President of the Nzemanle Council, the grouping of all Nzema paramount chiefs had moved that the president of the house, Kasapreko Kwame Bassayin III, withdraw a recent statement he issued to the effect that Osagyefo Kwamena Enimil was the recognized paramount chief of the Wassa Fiase traditional area.

Though Kasapreko Bassayin after listening to the heated argument that ensued after Awulae Agyefi Kwame's motion accepted that he erred and then apologized to the house after which he promised to write officially to the state attorney in Sekondi to withdraw the content of the letter, that did not stop the respected chiefs from raining insults on each other.

Moving the motion earlier after the regional minister, Hon. Joseph Boahen Aidoo, had addressed the house and left, Awulae Agyefi Kwame argued that the statement which was issued by the president following the request made by the state attorney who wanted to know the legitimate chief for Wassa Fiase was procedurally wrong.

According to him after Kasapreko had referred the state attorney's letter to the standing committee of the house, he ought to have also referred their recommendation to the entire house for approval as spelt out in article 274 sub section (2) of the constitution and section 9 sub section (3) of the Chieftaincy Act.

Agyefi Kwame said this . constitutional provision was not fulfilled yet a statement was issued to the effect that Osagyefo Enimil was the recognized Omanhene of Wassa Fiase as if the entire house had endorsed the statement.

The outspoken chief noted that since it was the entire house that accepted Osagyefo Enimil as Omanhene to the House of Chiefs, there was no way the house could have issued a statement that he was not the recognized chief but his concern was the breach of the constitutional provisions.

Agyefi Kwame, who has been a member of the house since 1956 and therefore the most experienced chief in the house, also condemned Kasapreko for stating in his statement that Odeneho Krukoko, one of the claimants to the stool was destooled by the chiefs and people of Fiase after serving a prison sentence.

He drew his president's attention to the fact that contempt or custodial sentence was not a destoolable offence according to the constitution and therefore for him to make reference to it was wrong in the first place because some members of the house had once been jailed but none of them was destooled for that.

He also pointed out that customary it was king makers who have the power to destool a chief and therefore for Kasapreko to have stated once again in his statement that Odeneho Akrofa Krukoko was destooled by the chiefs and people of Wassa Fiase when in fact these people had no power to do so was also wrong.

In fact our president's statement about the Wassa Fiase chieftaincy affairs was not only unconstitutional but also illegal and uncustomary which must be withdrawn immediately to avoid setting up a bad precedence that people could use as a weapon to claim that they have destooled a chief, he said.

Nana Yaw Gyebi ll, Sefwi Anhweaso Omanhene, Awulae Annor Adjaye, Omanhene of Western Nzema and other chiefs, supported the argument advanced by Awulae Agyefi Kwame and called the president to immediately withdraw the statement he had issued, failure of which the house would not back him should he be called any where in connection with his statement.

Other members of the house also alleged that though they are members of the standing committee, no invitation was extended to them to attend a meeting to deliberate on who is legally the chief of Wassa Fiase as demanded by the state attorney in Sekondi, Ms. V.O. Amartey.

It was after these comments and arguments on the president's statement that tempers flared up among the chiefs with some of them walking out from the chamber after heavy exchanges of words with each other which this reporter would not like to report.

Kasapreko Kwame Basayin has meanwhile withdrawn the content of the disputed letter that had also received a massive publicity by the media.

In a related development, the Omanhene of Wassa Fiase traditional area, Osagyefo Kwamena Enimil VI, has denied as Chronicle publication that he and his traditional council receive one billion cedis every quarter from the administrator of stool lands as royalties.

Speaking to this reporter at Sekondi last Tuesday, the chief said ever since he came to the throne he had received the royalties only twice and not every quarter as was reported. He did not however disclose the amount he had received so far.