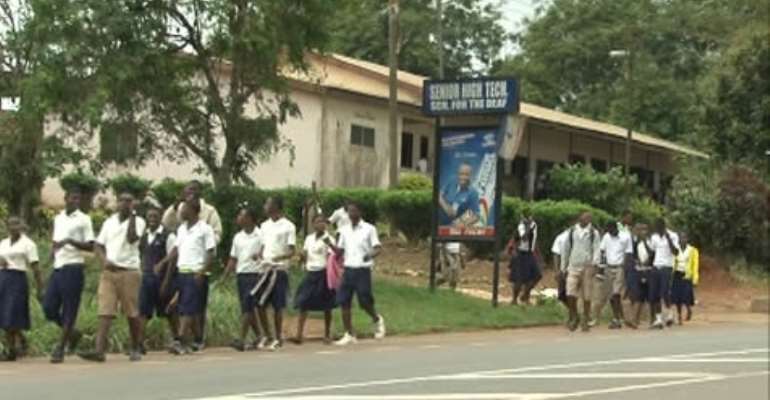 Contrary to a directive from the Director- General of the Ghana Education Service (GES) to “allow the services of sign language interpreters during Basic Education Certificate Examinations” Mr Ofori Mensah refused to allow the interpreter when the examination began last Monday.

GES Letter
A letter written by the GES said, “Recent complaints from heads of schools for the deaf and blind indicate that most of the schools do not have the services, of sign language interpreters during BECE.”

It said that situation adversely affected the performance of students.

In view of this, “districts directors of the affected districts are being directed to ensure that sign language interpreters are provided during BECE”.

The letter also directed all district directors to ensure that the supervisors of the various centres where schools for the deaf took the examination did comply with the directive.

In case no provision was made for the payment of allowances for these sign language interpreters during the current year, the letter stated, “We will entreat district directors/supervisors to include them in their budgetary allocation in subsequent years, as is done for other invigilators.”

It has emerged that because of the letter written earlier by the GES to all district directors on the subject, the Principal of the Cape Coast School for the Deaf and Blind, Mr Setumte Ametewee, wrote to the Metro Director of the GES appointing Mr Abraham Yemoson as the sign language interpreter in Cape Coast for the examination period.

Refused entry
But when the interpreter arrived at the centre last Monday, the first day of the examination, Mr Mensah refused him entry.

His explanation was that “allowing an interpreter to an examination hall is alien to our metropolitan area” and more so no provision had been made for the interpreter.

That resulted in a near scuffle between Mr Ametewee and Mr Mensah in front of the candidates.

Explanation
Mr Ametewee later told the Daily Graphic that the interpreter was not to give any added advantage to the candidates of the special schools but to guide them in some of the difficulties they went through before the examination.

He explained, for instance, that an interpreter should be able to assess whether the instructions on the examination paper matched what were on the brail, among other things.

According to Mr Ametewee, it was not for any reason that the GES gave an additional 30 minutes to the special students.

He said Ghana had begun a project to integrate the  visually impaired into mainstream education, where the provision of infrastructure adaptation was required.

He used the opportunity to appeal for support to enable the special pupils to develop their potential.