Morocco advises against hajj due to MERS threat 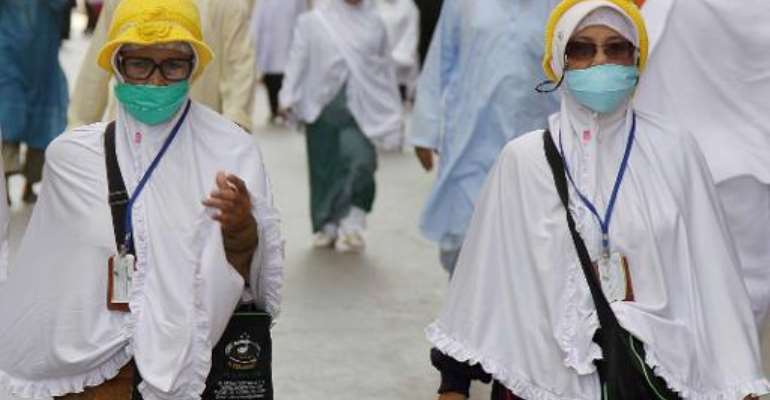 Muslim pilgrims wear masks on their way to Islam's holiest shrine, the Kaaba, in the Grand Mosque in the Saudi city of Mecca on May 27, 2014. By (AFP/File)

Rabat (AFP) - Morocco's health minister has advised the country's Muslim faithful against making pilgrimages to Saudi Arabia this year, with the deadly MERS virus having killed nearly 300 people there so far.

Last week, the health ministry urged the sick and the frail to postpone any planned pilgrimages until 2015, and circulated among those determined to go information on the health risks from the virus.

Speaking in parliament Tuesday, Lahoucine Louardi appeared to revise his ministry's advice, extending it to all Moroccans planning the hajj this year.

"We advise pilgrims not to travel to the Holy Sites," he said, quoted by the official MAP news agency, saying the decision was taken "after consultations with several parties, in particular the World Health Organisation (WHO) and Arab health ministers."

Mers "is a dangerous disease that kills one in three people infected," he said, adding that there was no antidote for it.

Contacted by AFP, a source at the health ministry confirmed the recommendation, while insisting that it did not amount to a ban.

According to official statistics, Morocco has an annual quota for 2014 of 25,600 pilgrims, which is strictly controlled.

Millions of people visit the Islamic holy sites in Saudi Arabia for the hajj, a pilgrimage all Muslims are expected to make at least once if their health and finances permit.

This year it takes place in October.

The lesser umrah pilgrimage may be performed throughout the year.

The desert kingdom has been the country worst affected by MERS, with 284 people killed there since it first emerged in April 2012, and hundreds more infected.

The WHO said Tuesday that, while a surge in MERS cases had receded, the situation remained of concern, "especially given the anticipated increase in travel to Saudi Arabia related to umrah, Ramadan and the hajj."