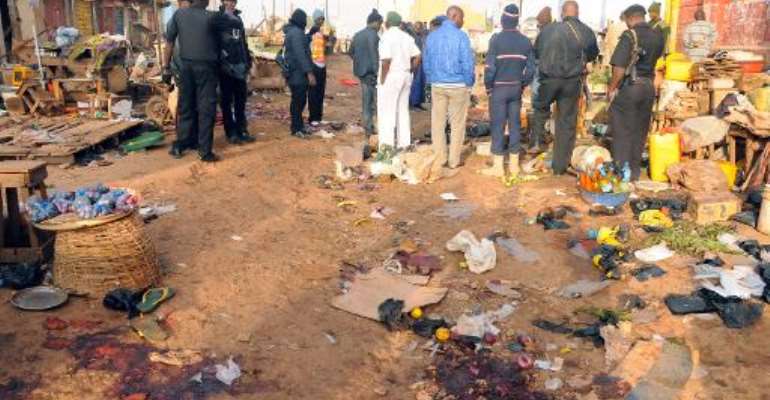 Nigerian security inspect the scene of a bomb blast at the Jos Terminus Market, on December 12, 2014. By (AFP/File)

The blast on Monday evening set much of the market on fire, including an area dominated by women traders, according to the Red Cross.

"Seven persons were confirmed dead while 25 others sustained various degrees of injuries, out which six have been treated and discharged and 19 others are responding to treatment," police spokesman Haruna Mohammed said.

So far there has been no official confirmation that the explosion was caused by a bomb, but Nigeria's Islamist insurgents have a long track record targeting markets during their five-year uprising.

Mohammed said a number of people tried to rob shops in the market in the chaos that followed the blast and that seven of them had been arrested.

Rescue workers and witnesses said reaching the victims immediately after the blast was impossible because of the raging inferno.

Earlier in the day a bombing at a bus station in the capital of neighbouring Gombe state killed at least 20 people, with Boko Haram suspected.

Nigeria's response has been widely criticised, including what many have described as the military's failure to contain the violence.

President Goodluck Jonathan, who is running for re-election in February 14 polls, has repeatedly vowed to end the conflict, but so far those promises have proved hollow.