By Akufo-Addo for 2016 UK Campaign Group 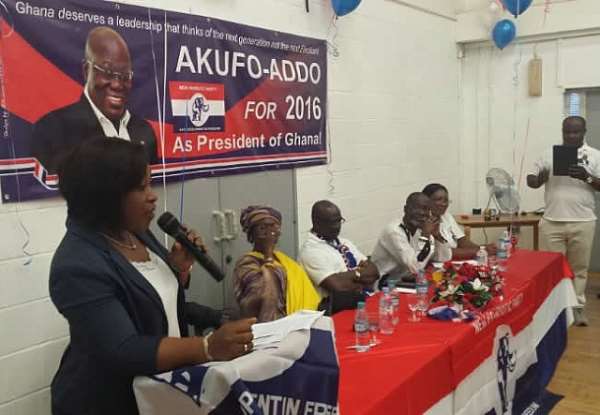 Members of the New Patriotic Party in the United Kingdom at the weekend took the lead to launch Nana Akufo-Addo's 2016 presidential candidacy bid with the launch of  Akufo-Addo 2016 UK.

The campaign group in UK last Sunday fired the first salvo from the diaspora in a bid to convince NPP delegates that Nana Akufo-Addo still remains the best chance of returning NPP to power in 2016.

The campaign launch for Nana Akufo-Addo at Tottenham's Chestnut Community Arts Centre in London, North London, was attended by a large crowd of supporters, NPP branch executives and non-partisan Ghanaians.

The group called for a grassroots campaign for Nana Akufo-Addo, not only for the forthcoming NPP Congress but also towards Election 2016. They charged supporters of Nana Akufo-Addo to be positive in their message and emulate the clear example of the man they are campaigning for.

Delivering the key note address at the UK campaign for Nana Addo, Shirley Ayorkor-Botchwey, MP for Anyaa-Sowutuom, who brought a special message from Nana Akufo-Addo from Accra, noted that Nana Akufo-Addo remains the man who is well known and accepted by the NPP grassroots and any attempt to change him will risk NPP losing in 2016.

She said, out of the 122 NPP Members of Parliament, she could confidently say that “Nana Addo can count on the support of about 100 of us.” She said the MPs are solidly behind Nana Akufo-Addo because, “Everywhere we go in our various constituencies the people tell us, 'if you don't bring Nana Addo we will not vote.' The people love him and they believe in him. Even those who admit to not voting for him are now saying they regret that decision and want us to bring him back.”

The former Deputy Foreign Minister to Nana Akufo-Addo during the Kufuor administration said of her former boss, “I was the happiest Deputy Minister because I worked under the best Minister. Nana is a professional. He has vision. And, I can tell you, he has never been corrupt, he is not corrupt, and he will not be corrupted.”

She noted that Nana remains the most viable candidate who can lead the vision of the NPP in any future administration.

She recounted Nana's sojourn in UK for 6 months after the Supreme Court verdict and how UK helped to prepare him for the March 20th Declaration. She therefore charged his supporters in UK to maintain the sense of conviction that they imbued in Nana to culminate his final decision to return to frontline politics.

“He was privileged enough to have education, because his father could afford it. He wants every Ghanaian child to have what he had. He wants to transform Ghana's economy because his focus is on the next generation and not just the next election. Nana remains in politics, not for personal gain. Because he has something big to offer to Ghana. Ghanaians must give him the chance to deliver for us.”

Rousing the enthusiastic crowd to a rousing praise song, he convinced the crowd of supporters that NPP, and for that matter Nana Akufo-Addo, did not lose the 2012 elections and for that matter it would be suicidal for NPP to change him as the flagbearer for 2016, especially since the NDC's second term ends in 2016.

Mr Gabby Asare Otchere-Darko, formerly of the Danquah Institute, and now a consultant based in London, lamented on the poor state of Ghana's economy and showed, with statistics, the amount of revenues that have been at the disposal of the NDC, yet with very little to show for all that.

He said, the NDC, from 2009 to 2013, spent, besides the billions of dollars of loans, GHS83 billion, as compared to the GHS31 billion President J A Kufuor spent in 8 years.

Gabby added that, by the time the NPP left office in January 2009, if the total debt of the country were to be shared, every citizen would owe GHS423.00. By February 2014, that amount has increased nearly five times to GHS2,255.00.

He said, Ghanaians are looking to the NPP for inspiration and the party cannot fail to respond to that call.

Gabby said he could feel the spirit of 2000 returning. “What we do know for a fact is that the 4th Republic has established a two-term trend, where every government so far has been given two terms and you are out. But, what is also notable about this is that the opposition party that wins has always maintained its candidate from the previous election. We saw it in 2000 and we saw it again in 2008,” the founder of the Danquah Institute stressed.

He admonished the NPP not to think that they invented democracy. “NPP is a party that spends more time, energy and resources fighting each other than fighting for power. It is frustrating,” he said.

He called on the party to spend less time fighting each other and more time being seen to be addressing the concerns of Ghanaians.

He reminded Ghanaians to be vigilant of the electoral process, especially the voters' registration process. He said, the party, and Ghanaians, in general, should not compromise on the need to have the voters register audited.

“You can't have a country with a median age of 20.8 having a  voters register with more than 56% of the population on it,” Gabby said, comparing the statistics from Ghana to other countries in Europe and Africa to stress home the point.

Ghana's median age means that, by the national census, some half of the population are older than 21 and the other half younger than 21. Ghana's voting age is 18.

Mrs Ursula Owusu-Ekuful, MP for Ablekuma West, took to the podium to thank NPP UK for the initiative in starting the campaign and pleaded with the people of UK to keep the fire burning in the bid to make Nana Akufo-Addo the flagbearer for NPP and the President of Ghana in 2017.

The Akufo-Addo for 2016 Campaign Group is made up of well-meaning Ghanaians in the UK, drawn from a wide section of the community including business people, ordinary members of NPP UK, the media, The Aljazeera Ladies, community groups and well-meaning individuals.

The group draws a great deal of support from the leadership of NPP UK and aims to bring together a number of initiatives here in UK and Ghana to support the campaign, not only to make Nana Akufo-Addo the flagbearer of NPP, but also the President of Ghana in 2017 with Dr. Mahamadu Bawumia as his Vice President.

The group aims to launch the campaign across UK and Europe and draw in a number of initiatives to help bolster Nana and Dr Bawumia's campaign in the forthcoming primaries and general elections.