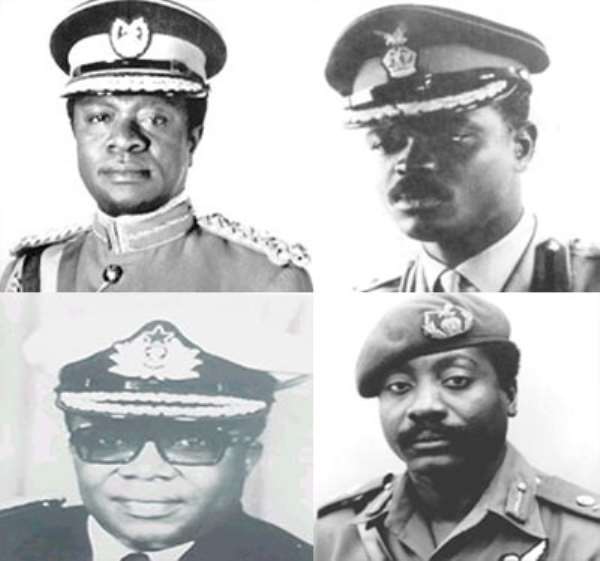 Christ The King Church, Accra, will this morning host children of the executed Ghanaian Generals and a Colonel as they re-commit the souls of their fathers to the hands of God in a specially arranged religious service.

The Christian activity comes off at the heels of a similar commemoration by former President Jerry John Rawlings, one of the architects of the 1979 putsch, whose highlight was the vitriolic lambasting of mainly the largest political grouping, the New Patriotic Party (NPP): he never wastes a moment in attacking former President John Agyekum Kufuor whenever the opportunity for addressing an audience presents itself.

This year's commemoration by Rawlings of the bloody June 4 coup was paradoxically held a stone-throw away from the venue where children of the executed Generals are remembering their fathers today.

Although a private service, the activity will attract a lot of attention and prompt a reflection of the divisive execution of the Generals by politically active Ghanaians.

Today's service was preceded by an advertisement in a state-owned newspaper.

The service, as a solemn occasion, contrasts sharply with the vitriolic-driven rhetoric by the former President whenever he delivers what is now an annual ritual to commemorate what he said was 'a necessary anger' vented during the coup of 1979: such rhetoric has derisively and derogatively been dubbed 'Rawlings' booms'.

He continues to tell Ghanaians that the execution saved what could have been bloodier than what was recorded because according to him, it calmed the nerves of agitated soldiers who were out to kill those they associated with the corruption of the times – something analysts condemn as arrant nonsense.

The celebration of June 4 stirs as much controversy as it did when the Generals – some on retirement on their farms – were marched to the gallows as it were, in 1979 for a heartbreaking execution which scar remains in the psyche of many Ghanaians. There was uncanny aspect of the execution which till today defies logic: the inclusion of a General from one of the ethnic groupings in the country as an 'ethnic balance' as Rawlings explained later.

Today, even though the former President seeks to justify the execution, it continues to be rubbished by both intellectuals and Ghanaians from all walks of life as a useless and unnecessary military adventurism.

Children of some of the executed Generals have not stopped to respond to the recent rhetoric by Rawlings about their late fathers. One of the children of the late General Utuka lambasted Mr. Rawlings when the man (son) recalled the circumstances leading to the execution of his father.

The theme for the occasion, 'Love, Forgiveness & Thanksgiving,' is aimed at mitigating the pain being harboured by the bereaved children and other family members of the late Generals – some of who can hardly recall the events which led to the execution of their beloved ones.

The murder of police officer is a wisdom-trigger to support ...
26 minutes ago