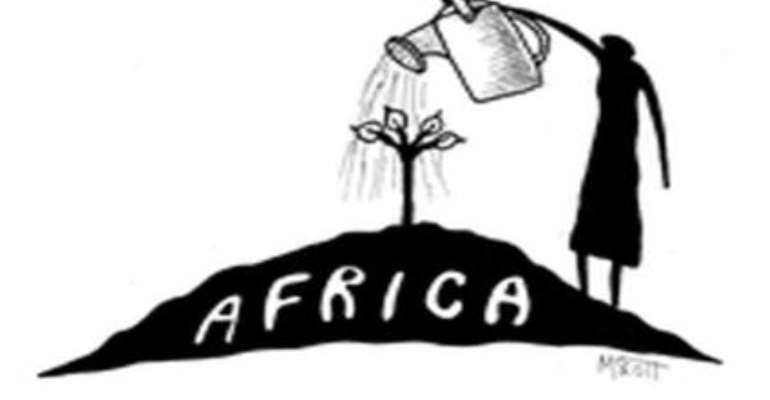 In Africa, we have experienced one of the best economic growth since late 1990's and into the twenty first century. This growth story is not seen in just some few countries but rather sweeps across many sub-Saharan African countries. The growth numbers are clear like an open book to be seen by all. Africa's economies are consistently growing faster than those of almost any other region - and at twice the rate of the 1990s.

The numbers:
The economic fundamentals are clearly in favour of Africa with the continents GDP growth from 2014 to 2015 projected to grow at an average of 5% with some individual countries projected to grow in double digits. The potential, the capacity; the zeal and the robust economic posture as well as steadier exchange rates, robust commodity prices, increased private capital flows and modest inflation could all be associated with Africa, something which would not have been possible to do just about two decades ago.

Many African economies are now growing faster than they have in the past four decades. It is now seen that six out of the world's ten fastest growing economies are in Sub-Saharan Africa. This GDP growth story is tremendous. We saw the emergence of double digit growth in some countries in Africa, though could not be sustained for a long period. Ghana above 11% for a year as well as Angola at 11.1% also for a year. Many countries are now growing above 7%.

Africa has got a very good fiscal story with debt to GDP ratios at the sovereign level which are nowhere near the burden of what is seen in Europe, America and other parts of the world. Africa's trade with the rest of the world has also increased.

Again, a new economic prosperity momentum has been established. Exports are booming and export markets have become more diversified. Foreign direct investment has increased by a factor of six over the past decade as it grew by 27 percent in 2011 alone. Private entrepreneurs have emerged as a dynamic force for change, driving innovation and transforming outdated business models.

Rising middle class:
The world is getting richer and about 90% of the world's population lives in the emerging markets and the expectations are that we would have approximately 3 billion new people in the world's middle class by 2030 and a lot of those people will not just be coming from Asia but Africa.

Africa's middle class stands about 400 million people today and is estimated to balloon to 1.1 billion by 2060, thus representing 42% of the continent's population by that year. There is increasing pace of urbanization and 'consumerization' in Africa. As Africans flock to cities and disposable incomes rises, demand for modern goods and services, such as, telecommunications and banking services is seen to be accelerating. This rising middle class has presented global businesses whether based in Asia, Europe or the Americas as well as home-grown African firms a market they cannot miss out on.

Labour and Youthful Population:
Sub-Saharan Africa alone boast of a population of 872.3 million people. The labour story has been very positive with 60-70% of Africans under the age of 25 and by 2050; Africa's population of 2 billion would have overtaken that of India (1.6bn) and of China (1.4bn). This young and dynamic population has presented something that global businesses and investors are leveraging on.

The continent is again rich with untapped natural resources, arable land and ever buoyant consumer market. With a population of little over a billion, the continent possesses a strong consumer market for businesses. In terms of productivity, the continent in the past decades has been seen as a great absorber of technology and is able to combine labour and capital to help spare economic growth.

Political stability and the establishment of democracy in many African countries has become the norm. Whiles in the 1960's through to the 1980's, more than 36 countries in Africa were in political turmoil, the story is totally different now, with just a handful of countries still grappling with political stability. This presents an atmosphere suitable for investors which has never been seen before.

Questioning the growth:
Economic growth in itself will not bring about sustainable development. It is therefore appropriate to begin to question the strength and the capacity of the growth we are seeing now. To some of us, the issue of economic growth lands at the door step of transformation. Yet to achieve economic transformation, there is the need to have an increasing GDP growth sustained for a very long period.

I see a growing schism globally and across the continent about the impact of this growth in the lives of people. What actually is the strength and the pattern of this economic growth across the continent? Can this positive growth be sustained for long? Is this growth inclusive enough? Why does economic development not translate into human development and reduction of poverty? Is the recent burst of economic inequality nothing but a temporary consequence of the transition to a new and more productive economy? Will inequality, once under way, prove difficult to reverse? In trying to answer these legitimate questions, it would be appropriate to really understand the growth trajectory across the continent.

In simple terms, economic growth means that overall, the economy is doing well and most people have sufficient income for essentials and perhaps a little extra. It also mean that businesses are hiring and jobs are relatively easy to get. It does not mean that everyone has a job or that everyone is well off. The growing number of success stories across Africa indicates that broader social and economic progress is realistically attainable for most Africans. However, the need to ensure that the continent's economic growth also creates jobs and helps rescue millions from poverty is of utmost importance.

Inclusive growth:
The number one question that comes to mind in trying to understand the current positive economic growth of Africa is how inclusive the growth is. This is because without a properly laid out policies to include more people in the production and distribution of this growth, poverty would never reduce on the continent.

What an economic growth normally does is to create jobs and reduce poverty. Interestingly, the gap between the rich and the poor are widening in Africa. There is a concentration of growth benefits at a tiny side of most economies whiles majority are left to rot in poverty. This economic prosperity has also been largely jobless and therefore associated with increasing unemployment especially among African youth. In addition, this growth has left out many already disadvantaged groups such as rural communities, women, traditionally marginalized people, etc. In short, the economic prosperity in Africa has not been inclusive enough and this poses a worrying trend.

In order to bridge the gap widening between the rich and the poor, the growth trajectory must be inclusive enough. This means that there is the need to critically examine a variety of issues such as identification of strategies for ensuring that growth translates into improved livelihoods for people; policies that empower the poor and landless, and educational policies that build the capacity of youth and other disadvantaged communities and enable them to participate in the economy.

It should therefore be noted that the recent economic growth, will not by itself bring about sustainable development on the continent. Because poverty and inequality are so intimately linked, predictable and sound macroeconomic policy frameworks that are supportive of inclusive growth, private sector development, employment, and value addition, are essential for Africa's economic transformation and sustainable development.

Again to ensure that growth is sustainable and continues to improve the lives of the many, countries now need to vigorously promote economic transformation agenda, one which is very sustainable and inclusive on all fronts. They must ensure maximum utilization of all resource inputs, especially labor.

Economic growth and inclusiveness works. It can be successful. It tends to build on itself. But it must get started. There must be a high level of economic and political consciousness in nations failing to bridge the gap between the rich and the poor. After that, the tremendous dynamism of self-sustaining economic growth can take hold.

More Feature Article
ModernGhana Links
The NPP 2024: The Most Important Factor Missing in the Arguments – E. G. Buckman
The Three Stages Of Corruption: How We Are All Part Of The Problem
War Talk from the Mad Monk: Tony Abbott goes to Taiwan
When, how and why can a curse be invoked on someone?
Leadership Involves Taking New Territories
The honour among the criminally-minded aliens: Who is mistreating the law-abiding Nigerians?
Ghana is not a ‘shithole nation’ to accept the legalization of homosexuality
Send for the angels
Failed Leaders Wrapped In Past Glories Shamed Abroad
TOP STORIES