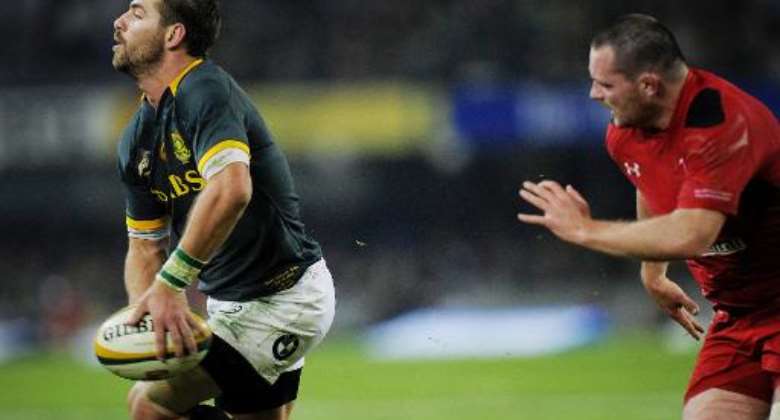 South Africa wing Willie le Roux (L) gets ready to pass the ball during a test match between South Africa and Wales at Kings Stadium on June 14, 2014 in Durban, South Africa. By Gianluiti Guercia (AFP)

Durban (South Africa) (AFP) - A first-half blitz from Willie Le Roux propelled the Springboks to a 38-16 rout of Wales in Durban on Saturday in the first of a two-Test series.

Fullback Le Roux scored one try and set up three others at King's Park where Bryan Habana crossed over twice to go along with tries from Duane Vermeulen and debutant Cornal Hendricks as the Boks retained their unbeaten record against the Welsh on home soil.

Fly-half Morne Steyn was on song with the boot as he converted all five tries plus a penalty for a 13-point haul.

Wales wing Alex Cuthbert scored a fine solo try, which was converted by James Hook, in a losing effort with Dan Biggar accounting for two drop goals and a penalty.

The Boks were captained by Victor Matfield, who was making his return to Test rugby three years after his retirement, in the absence of injured skipper Jean de Villiers as the home side featured six changes to the team that beat an invitational World XV last week.

Wales boss Warren Gatland, who on Friday was made an Officer of the British Empire (OBE) in the queen's birthday honours list, included George North in his starting XV despite a recent illness.

Wales, whose lone victory against South Africa came 15 years ago in Cardiff, made a flowing start and were rewarded as Biggar landed an early drop goal.

That stirred the Boks into action, though, and the response from Heyneke Meyer's men was immediate as Le Roux clipped through a deft kick that was touched down by Habana in the corner on six minutes with Steyn nailing the conversion.

Wales were dealt a costly blow shortly after when Jamie Roberts was sin-binned for taking out an airborne Le Roux, albeit not deliberately.

The Boks made their numerical advantage count as Vermuelen ploughed over following a line-out with the undermanned Welsh defence simply overpowered and Steyn again converted to make it 14-3.

Biggar drilled a second drop goal to pull the Welsh to within eight but they were again torn apart moments after the restart as Le Roux darted down the left before dishing across to Habana who sprinted across the line for his second try of the contest.

Having set up two tries already it was then the turn of Le Roux to go it all alone as he collected his own nasty, bouncing kick that deceived Welsh counterpart Liam Williams to score the 'Boks fourth try just before the interval.

Biggar slotted through a penalty to leave Wales trailing 28-9 at half-time but the onslaught continued in the second period with Steyn sending over a penalty after the visitors were penalised for a dangerous tackle.

Hendricks made it a debut to remember as South Africa moved the ball from one side of the pitch to the other before Le Roux offloaded to the wing who brushed aside North on his way over.

The floodgates seemed destined to open by this stage but the Welsh hung tough to keep the Boks at bay before notching a consolation try courtesy of Cuthbert's magnificent individual effort on 68 minutes as he ran from his own 22, weaving his way through the home defence before cutting inside Le Roux to touch down.

The sides will line up again in Nelspruit next Saturday for the second and final match of the series.