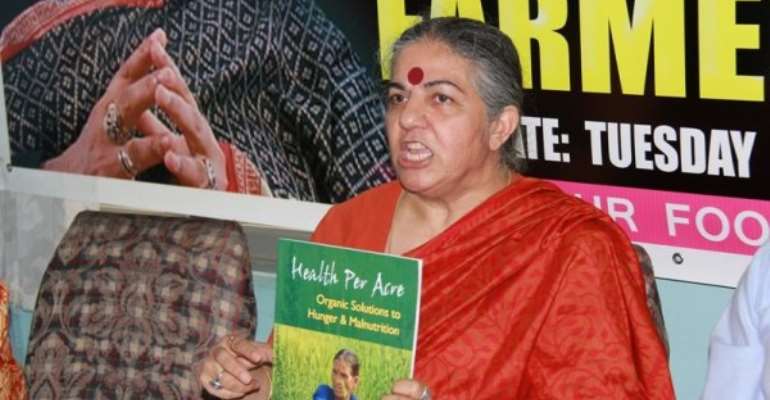 Making a strong case against the bill at a public forum held here late Monday, the FSG declared that the bill, which is awaiting presidential accent, would enslave Ghanaian farmers and expose them to perpetual exploitation and slavery.

The forum was organized by the Alliance for Food Sovereignty in Africa (AFSA) in collaboration with the FSG under the theme 'Food Sovereignty and Farmers Rights - Our Food Under our Control'.

The various speakers sounded a strong message to Ghanaian authorities that the passage of the PBB into law would face a stiff opposition from civil society.

The forum attracted a cross-section of the Ghanaian society and guest speakers from India and other African countries.

Vandama Shiva of the Research Foundation for Science, Technology& Ecology, India, who was the guest speaker, vehemently rejected attempts to foist patented seeds from plant breeding companies on Ghanaian farmers.

Shiva, an ardent campaigner against Genetically Modified Organisms (GMOs), alluded to the introduction of patented seeds from Monsanto, the giant American seed breeding company, which she said portended danger for Ghanaian and African farmers.

Referring to GMOs as 'seeds of death and disease', Shiva said such patented seeds posed a serious danger that 'threatened our farmers, our food and our health'.

She spoke at length about Monsanto which in the past lied to the world that their products such as DDT, Agent Orange and PCBs were not poisonous.

'Today, the same company is producing GMOs with high doses of pesticides, so eating GMO implies eating pesticides,' she declared.

Vandana, a renowned ecologist and academician with over 20 books to her credit, said GMOs were associated with severe diseases such as depression, sterility, diabetes, and low male sperm quality, among others.

She observed that when people controlled seeds, they controlled life, adding that what Monsanto and others sought to do was to introduce a bio-imperialism, a new face of colonialism.

She noted that Ghana had passed the Bio-Safety Act and was looking forward to passing a new law, that is the Plant Breeders Bill, which could prepare the ground for Monsanto to bring GMOs into Ghana.

She therefore called on Ghanaians to do all they could to avert this looming danger, saying: 'Together, let's defeat the seeds of death and disease.'

Samia Yaba Nkrumah, Chairperson of the Convention People's Party (CPP), and a leading member of the Coalition for Farmers Rights and Advocacy against Genetically Modified Organisms, referred to the PBB as 'a danger to our sovereignty because it would facilitate the entry of GMOs into our food chain.'

The forum, she said, was therefore, to provide ammunition for Ghanaians to restrict the entry of GMOs into the country.

'We must take this threat seriously,' she declared.

Kwesi Pratt Jnr, editor of the Daily Insight, and social commentator, observed: 'What we eat, how we eat, and how to get what we eat tomorrow is very important.'

Pratt questioned the value of Ghana's independence if the country resorted to importing 600 million dollars worth of rice into the country every year.

He reacted vehemently to any suggestion of allowing the PBB to be passed into law, thereby permitting GMO seeds to be imported to enslave Ghanaian farmers.

'We need to be able to grow our own seeds and sew them,' he stated, adding that it was important for the nation to be cautious when introducing things which consequences could not be predicted.

'GMOs can never and will never be an answer to our problems, and called for 'a new society in which nobody will go to bed on an empty stomach.' Pratt stated.