'Morgue Baptism' Is Impractical In Fighting Corruption And Highly Untenable 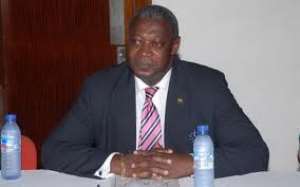 It's really shocking that Prof. Badu Akosa would engage in such regrettable froth on the issue of corruption. I am completely appalled that a man whose party has trusted him enough to make him the 'shadow Minister of Health' would suggest such a populist solution to an otherwise serious issue.
I wonder if this is an indication of how Prof. Akosa intends to fight corruption at the Ministry of Health if the CPP wins the next election. He would march all his colleagues in Cabinet, I suppose, to the Government's mortuary and show them 'how the bodies have been arranged'?

How practical! At best I can only rationalize his comment by thinking that being a pathologist Prof. Akosa is only recommending a medical solution; however, what Prof. Akosa should know is that corruption is a social canker that cannot be addressed so summarily from a sedentary position such as his, given from a consulting room. Nor can it be addressed, at least effectively, through radio rhetoric.

Comments such as those of Prof. Akosa in my view trivializes the fight against corruption and has the potential of eroding by gradually nibbling the disgust that Ghanaians must feel towards corruption and those who engage in it. It normalizes it and makes it seem less of a crime than rape or murder. It transforms into an absolute moral issue an act that is criminal according to our statutes and attempts to remedy it by an appeal to conscience.

But why won't Prof. Akosa's 'solution' not work?

I am not sure when Prof. Akosa had his first encounter with a cadaver. It must have been many years ago. I assume being human he found the sight of the naked, lifeless body, worrying as it rested on the surgical bench.

Like many medical students I assume his reaction was one of terror, and then disgust. Today, I am sure Prof. Akosa won't mind a quick break to have lunch if he feels like it while performing an autopsy.
A constant exposure to corpses has removed from him the natural emotional reactions that the average person would express upon being confronted with such a sight.

His emotional response however is not different from the emotional response of the average person. A constant exposure to the horrific and sadistic pornography of corpses would achieve the same results. Eventually people would become desensitized.

What is worse, it would erode the 'fear' of death and the faith in an afterlife two key factors that have kept corruption in our society from getting worse than it already is.
There is some glimpse of the future Prof. Akosa's solution would create.

It would be strange to suggest that morgue attendants are a special breed of people who lack the mentality or emotions that Ministers of States as human beings have. If they are crude, cold and uncaring of the sensibilities or sensitivities of those who have lost their relatives; it is the result of time and 'morgue baptism'.

The Prof would also acknowledge the corruption in the Medical fraternity. Worse than that, is the cruel disregard for the worth of human life that underpins the value system of doctors in the country. Yes, doctors in Ghana generally have no regard for human life. And why, don't they haven regular morgue baptisms?

But more serious than the misguided views on how to fight corruption is what seems to underlie Prof. Akosa's recommendation. One gets the sense that the Prof implies an insidious tolerance for the backward state our mortuaries are in. In civilized societies, people who visit mortuaries are not confronted with decomposing bodies scattered haphazardly on mortuary floors.
The shadow Health Minister really should be condemning the disgusting, horrific pornography that greets the eyes of people who visit mortuaries rather than seeking to turn our mortuaries into tourist destinations.

He should be telling us how he is going to ensure in places like the Tema General Hospital, bodies would not be brought out of the morgue and dried in the sun every day under his watch because of power fluctuation, and how he is going to ensure that the bodies are not left to decompose or left to be fed on by mice.
I believe the issue of corruption is complex and requires a thoughtful approach. Its implications affect millions of Ghanaians every day both directly and indirectly. Everyone knows corruption is bad, ironically, even President John D. Mahama.

The solution to this canker however, is not esoteric. It requires us to realize that we are no longer in the theological state and that God would not punish the corrupt if we fail to do so. God would not play the role of the State of enforcing our laws for us! The State must assume responsibility for the punishment of those persons who engage in corruption.

State Institutions established to fight corruption must also be guaranteed a reasonable degree of autonomy to perform their duties. They must be able to prosecute cases without any interference from a politically appointed Attorney General. People like Prof. Akosa must refuse to be partakers in the political football that characterize discussions on corruption in this country, but rather be consistent in reminding the Government that her duties to the citizens of Ghana including not just telling us that there was corruption under the last NPP Government but prosecuting those who committed it as well as prosecuting their members who engage in corruption.
The corrupt must not feel they can get away with it. Punishments must be swift and harsh enough to show the disgust of society towards corruption.
That is the only way we can solve corruption! If Prof. Akosa thinks a morgue baptism is the best way out, then am sorry to say his apprenticeship to become a substantive Minister for Health has a long distance to travel.

Let's go on our knees and pray for Akufo-Addo for God's inte...
17 minutes ago

NDC race: I will retain my seat and help bring Mahama back t...
27 minutes ago