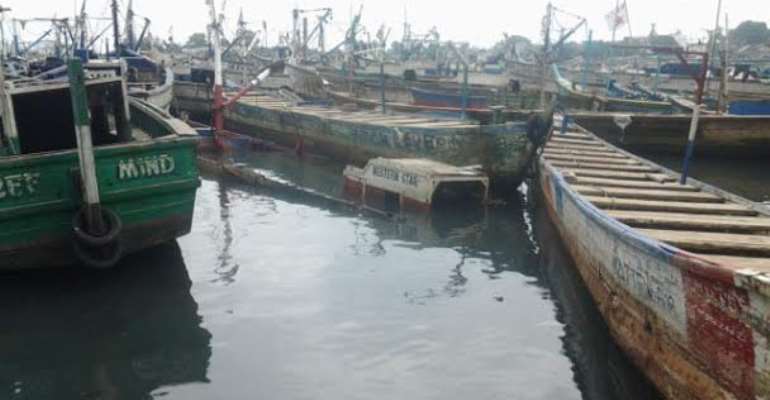 DAILY GUIDE gathered that the fishermen were travelling from Sekondi to Tema to carry out some maintenance works on their vessel when the unfortunate incident occurred.

Some of the boats that are not sea worthy
The eight were among about 20 fishermen on board the vessel christened, 'The Truth No.1' with registration number GR 035 TM.

According to sources, when the vessel sank, 12 out of the 20 fishermen on board were lucky to have been rescued by a team who were dispatched in another vessel to the location immediately after the tragedy.

Confirming the story to DAILY GUIDE, Emmanuel Botwey, secretary to the Sekondi branch of the Ghana Inshore Fisheries Association (GIFA), noted that at about 5:30 pm on Monday the fishermen moved from Sekondi and were heading towards Tema.

He indicated that his outfit had a call yesterday morning that the vessel that moved from Sekondi and was bound for Tema last Monday had sunk in the Elmina-Cape Coast waters.

He confirmed that 20 fishermen were on board and that out of the number 12 had been rescued adding, 'But as I speak to you now we have not found the other eight'.

He disclosed that personnel of the Ghana Navy were also helping to locate the eight fishermen who were missing.

He bemoaned the fact that most of the boats at the Bosumtwe Fishing Harbour in Sekondi were not sea worthy and because of that the fishermen needed to do regular maintenance on their vessels to prevent them from sinking.

Mr. Botwey indicated that some few days ago, some fishermen had to return to the fishing harbour a few minutes after setting off for a fishing expedition, when they realized that their boat was sinking.

He was also not happy that the country's two major dry docks in Tema and Sekondi were being operated by private people and that it was very expensive for the local fishermen to engage the services of the private company to maintain their vessels.

He revealed that the minimum price the fishermen had to pay for the routine maintenance of their fishing boats was GHâ‚µ5,000.00.

He therefore, appealed to the government to give the operations of the dry docks to the Ghana Inshore Fisheries Association since the association is a major stakeholder in the industry.