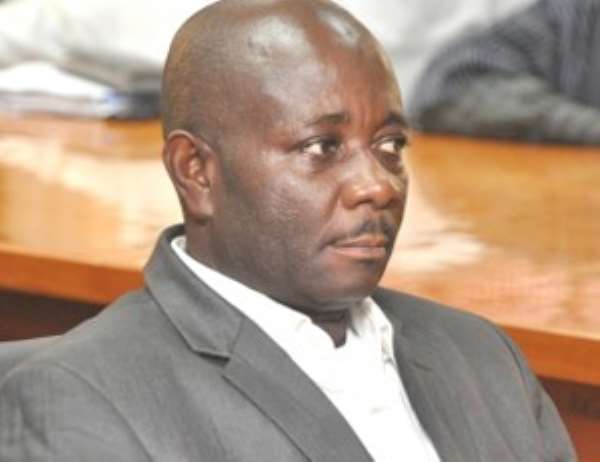 Akwasi Addai Odike
The man who prides himself as the founder of the United Front Party (UFP), Akwasi Addai, popularly called Odike, has threatened to deal ruthlessly with the embattled National Chairman of the party, Nana Agyenim-Boateng also known as Gyataba.

This was after confusion had broken out between two factions of the party at the headquarters of the Electoral Commission (EC) in Accra last week where Gyataba was assaulted in the full glare of EC officials by Odike boys.

There is already a standoff between the two individuals over the ownership of the party - with each claiming to have sacked the other from the UFP - which is struggling for survival.

Apparently, both had received invitations from the EC to attend the Friday Inter Party Advisory Committee (IPAC) meeting at the commission's headquarters.

Drama
In the process of registering to participate in the meeting, Gyataba told DAILY GUIDE, Odike emerged at the EC office in the company of three young men pointing at him saying, 'This is him; get him out of this place; make sure he doesn't go into the meeting.' That was between 10:30 and 11:00am.

Suddenly, Gyataba continued, 'They started slapping me as one of them held my hand and bit it.'

This, he said, happened in the presence of the General Secretary of the Great Consolidated Popular Party (GCPP), John Ameka and other security men, even though attempts to reach Ameka for confirmation was unsuccessful since the service providers claimed his phone was 'either switched off or out of coverage area.'

The embattled UFP Chairman, however, went to the Adabraka Police Station to lodge a complaint of assault.

But upon reaching the EC premises with the police, they were told that Odike and his boys had long left the area.

Asked how he reacted to the attack, he said, 'I took it easy because I did not want to take the law into my hands.'

Medical Report
Gyataba was subsequently issued a police medical form to go for treatment at any government hospital.

Upon examination, one Dr. A. Jalloh at the Korle Bu Teaching Hospital wrote in his report, 'There are four 1.5mm wounds over dorsum of left hand…bite marks' and that 'the wound was cleaned and Drez cream applied and he was put on antibiotics and Analgesia.'

Denial
But when reached on phone, Akwasi Addai of Odike Ventures fame denied having a hand in the assault on Gyataba.

'It wasn't me; it was our party members,' he claimed.

Odike indicated, 'He (referring to Gyataba) was trying to use excessive force and we resisted, including the Electoral Commission and the security guys. He tried to raise his hand on one of our boys but the boy was very strong; he blocked it and beat him mercilessly. They then threw him out to go and bring the police.'

Prior to that, Odike alleged that Gyataba had been sourcing letters meant for the party at the Electoral Commission through illegal means and that just last week he attempted to take one of such letters from the EC when he met another member of the party who challenged him.

Odike said he therefore had cause to personally go to the EC headquarters to inquire from them why they continued to deal with Gyataba, to which he said the officials claimed they did not have his (Odike's) contact and apologised accordingly.

Odike's Threat
That notwithstanding, he said, 'This guy has been tormenting our party for so long a time. We are going to use every force to stop him from destroying our party and if care is not taken, he will hear and witness…a lot of brutalities will go against him, I must confess.'

Asked what he meant by that, he explained, 'I mean we are going to face him squarely if he tries to restrain us from organizing our party…any means we are going to use; we will use.'

He therefore ignored admonition to report Gyataba's purported conduct to the police instead of taking the law into his hands.

He retorted angrily, 'If he dares, we are going to face him both physically, logically; whatever means we can marshal to stop him, we will do that…we are not going to countenance him. Even if I stand before the high court of this country, I still say same.'