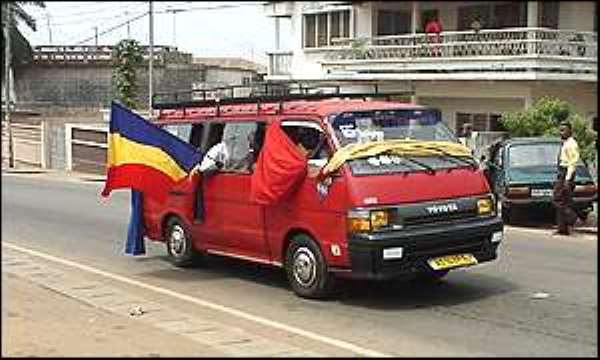 Fans of Accra Hearts of Oak Sporting Club seem to be in doubt over the chances of the club in their crucial first leg encounter against Etoile du' Sahel of Tunisia in the CAF Champions league match at the Accra Sports Stadium next Sunday.

This follows the recent spate of losses being experienced by the club in their trial matches. The club has suffered it third defeat in one week with the heaviest one at the hands of the Benin National team, the Squirrels on Sunday at the El Wak Stadium.

The Squirrels defeated Hearts 4-2, a result which gave the fans a cause to doubt their chances.

The fans could not figure out the cause of the defeats as some of them put the blame on the players, management and the coach whilst others concluded on the poor nature of the pitch at the El-Wak Stadium. Coach Jone Attuquayfio, the Technical Director of the Squirrels however believes his boys were underrated by the Phobians, hence Hearts were punished for the defeat.

The beautiful flow of the game which was largely affected by the poor nature of the pitch made ball control difficult but the Phobians managed to open the scores in the 17th minute through a perfect combination between Adjah Tetteh and Louis Agyeman whose cross towards the defense of the visitors saw Emmanuel Osei-Kuffour tapping in the ball to beat keeper Yussif Campos for the opener.

The Squirrels swiftly responded and launched an intensive attack in the Hearts goal area and succeeded in getting a penalty when Dan Quaye brought down a Beninoise attacker in the vital area. Abu Meiga displaced keeper Sammy Adjei for the equalizer in the 21st minute.

The two sides battled for supremacy after the goal but once again, it was the home team who went ahead in the 32nd minute through skipper Amankwah Mireku who fired a grounder from the edge of the box after overlapping into the area of his opponents.

The celebrations of the goal was however brief as the visitors found the equalizer four minutes later through Stephane Sessegoun whose deceptive shot from the edge of the box keeper Adjei had no answer to, to end the first half.

Hearts had the opportunity to equalize on resumption when referee Alex Quartey awarded them a penalty after a Beninoise defender had handled the ball in the vital area.

Dan Quaye however surprisingly missed his kick to the disappointment of the home fans.

After this miss, the visitors did not relent in their effort to carry the day as they increased the tally in the 62nd minute, when Sessegoun went round Mireku and laid the ball on the path of substitute Sevi Amanssou to score.

These changes did not however make any impact on the team as the Beninoise maintained their pressure on Hearts and sealed their doom in the 69th minute through Amanssou who connected a cross from Sessegoun for the fourth goal to put the game beyond the reach of Hearts.

In a desperate search for a consolation goal, the Beninoise defense stood tall and managed to thwart all the efforts of the homesters for the rest of the game.

Hearts plight was further worsened when Agyeman was sent off in the 88th minute for violent play.

Skipper Mireku in a post match interview with the GNA Sports said the defeats are rather morale booster to the team, adding that these will rather motivate them to go all out on Sunday.

He said they had learnt their mistakes and will work on them to prepare well for the game against Etoile du' Sahel.

E/R: Police on manhunt for suspected robbers who escaped dur...
40 minutes ago