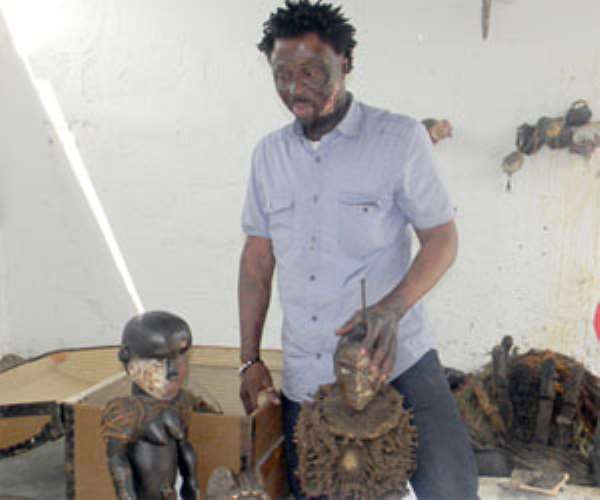 Sport lovers and enthusiasts are looking forward to the display of African 'witchcraft' at the world cup tournament starting in Brazil this week. Particularly many will be looking out for Ghanaian witchcraft and how it will get Ghana to win its matches. Thanks to a local spiritualist, the Ghanaian witchcraft is already wreaking havoc. Claims by the country's 'most influential witchdoctor', Nana Kwaku Bonsam, have made headlines around the world. Bonsam has declared that he would use his 'magic' to stop Cristiano Ronaldo from playing at the world cup, or at least from playing Ghana. The reasons for these weird claims may not be far fetched.

Since FIFA announced the teams that would play in the different groups, fear had gripped many Ghanaians. Ghana is in group G- the world cup's group of death-with Portugal, Germany and USA. And Ghana must beat Germany or Portugal to advance. It is not certain that Ghana will beat the US. To many Ghanaians, beating one of the two countries will be difficult that is why Kwaku Bonsam is offering his free spiritual services at this critical point in time. And he is going after Ronaldo.

Bonsam said he used some occult means to orchestrate Cristiano Ronaldo's recent knee injury which caused him to miss a friendly match against Greece. The knee injury is an 'evidence' that his magic is working. According to Bonsam this marks the beginning of Ronaldo's sorrows. Series of injury will eventually prevent Ronaldo from playing at the world cup. There is no confirmation yet that Ronaldo has been ruled out of the world cup due to this injury. But Bonsam is already claiming that this would happen. He has marshalled his sympathetic magical wares against the world best player. What effects will that have on Cristiano Ronaldo? Will Kwaku Bonsam succeed in getting Ghana to lift the world cup through his magic?

Nana Kwaku Bonsam claimed to have conjured a special powder from his gods. He mixed the powder with leaves and concoctions and placed them around the photos and caricatures of Cristiano Ronaldo. In addition, he plans to use 'four dogs' to produce a special magical charm called 'Kahawiri Kapam'

This charm will spiritually inflict Ronaldo with serial injuries that would keep me out of the world cup and likely out of playing professional soccer for life. Wow!

Bonsam states that the injury was spiritual and had no cure. By making this claim, Kwaku Bonsam has stretched his paranormal nonsense too far. He is making a caricature of himself and his so called powers. Bonsam is exposing his supposed witchcraft influences to international ridicule.

The belief that incurable diseases are magically orchestrated is popular in Ghana. Claims of causing incurable illness are among the driving forces of witchcraft accusation in the country. So, it is 'understandable' when one makes such wild claims in a country where many people cannot afford adequate health care and therefore rely on traditional and faith healing system.

Magic and medicine mix in the traditional and faith healing system. Weird claims like those made by Nana Kwaku Bonsam are common.

Bonsam has demonstrated his charlatanry by thinking that his 'witchcraft' abracadabra can apply in the case of Ronaldo who can access the best health care in the world. Witchcraft is superstition and thrives due to fear or ignorance. Nana Kwaku Bonsam and others who peddle such superstitous claims are miners of popular fears and anxieties. Magic has practically not place in football. Magical charms can affect those who believe and use them psychologically probably by boosting their confidence or morale. But the psychological impact is so marginal that it cannot be responsible for claims like the ones Kwaku Bonsam is making. If witchcraft is effective in football, many African teams would have lifted the world cup.

But my question is this: Why Ronaldo? Why Portugal and not Germany? Is Ronaldo the only player in the Portuguese team? Why is Bonsam making this claim in reaction to the injury? Why can't he now be prophetic in his so called magical schemes and now tell us who else will be injured among the German or Portuguese players? If he has the magic to make Ghana win, must he injure Ronaldo to accomplish this?

If he has spiritual powers as he claims why can't he join the Ghana national team and use his powers to secure victory for them in Brazil?

This is not the first time witchcraft related claims are featuring in Ghanaian football. In 2012, the then coach of Ghana, Goran Stevanovic attributed the failure of Ghana to beat Zambia in the Semi Final African Cup of Nations to accusations of witchcraft. He claimed that the players were using 'black power' against each other, and this negatively impacted their performance. Coach Stevanovic said a change of mentality is needed to get rid of this negative trend in Ghanaian football.

But that change of mind has not happened and may not happen for now due to the operations and pronouncements of the likes of Kwaku Bonsam. So as the world cup tournament kicks off in a few days time, people are looking forward to seeing 'black power' in action, Ghanaian witchcraft will surely be on trial.