Oko-Vanderpuyie Must Go: And Mahama Too 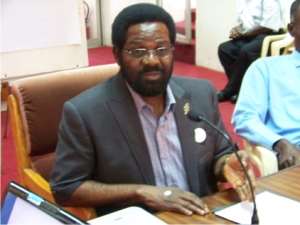 I wonder how Mr. Vanderpuye felt the morning after the floods. In keeping very much with past tradition, he toured the flooded areas. He made more promises than he did the last time he had taken such a tour and gave more assurances of the Government's support for the victims.

But, didn't he feel terrible about how expensive his incompetence is becoming to this dear nation of ours? Didn't he feel prompted to write a resignation letter and give way to someone better to handle the affairs of the AMA? Didn't he feel embarrassed that with proper drains and more responsibility on his part the floods could have been averted? Was he totally insulated from appreciating the mess he had caused?

Didn't he feel, in cartoon language, like a jackass? If he didn't feel any of this then he is not human, but certainly Mr. Vanderpuye is human. He reasons and has emotions. Yes, he reasons and I know it. He reasoned not too long ago that if he incited a group of tribal bigots well enough against the NPP; then his party would win the Greater Accra Region. Was he not the one who thought that no monument in Accra deserves a name un-Ga?

He has emotions too, and I know it. I saw him cry his eyes out when Atta Mills died. It was emotions, though, and not his sense of reasoning, that led him during that time to abandon his work and go around Accra naming everything he saw after the late Mills and forcing tributes out of the poor people who otherwise didn't care a hoot whether the late President was in heaven or hell, alive or dead.

So why has Mr. Vanderpuye not resigned? Hasn't it occurred to him that his continued stay in office is causing irreparable damage to the people of Accra in particular and Ghanaians in general?

The floods, as usual, were terrible. Hundreds of thousands of Ghana Cedis worth of property were destroyed. But the most expensive loss was the life of that middle aged woman that perished. Yes, one woman died. One woman who wouldn't have died had Mr. Vanderpuye been responsible enough in his role as AMA BOSS. And that is why Mr. Vanderpuye must be held responsible for that death.

Why shouldn't we blame him? After-all, Governments are formed to solve problems and when problems persist so long after the election of a Government, something is definitely wrong. In this case, what is wrong is Mr. Vanderpuye, he is simply incompetent!

I am not saying he should be prosecuted for murder or manslaughter, the incompetence of this administration when it comes to prosecution is so well known that no one would risk recommending they prosecute anyone except they want that person to get away. What I am saying is that Oko Vanderpuije must be sacked. That stain of incompetence on the record of the AMA must be cleaned.

But am not sure Mr. Vanderpuye it would be the President sacking Mr. Vanderpuye. The apple doesn't fall too far from the tree they say. The President himself hasn't cut a better image of himself when it comes to competence. He has gotten away with worse, and so has his over-glorified servants.

We must be the ones who get rid of Mr. Vanderpuye. We must put pressure on him to resign. By whatever means we must get him sacked, and get Mahama too sacked, in 2016.