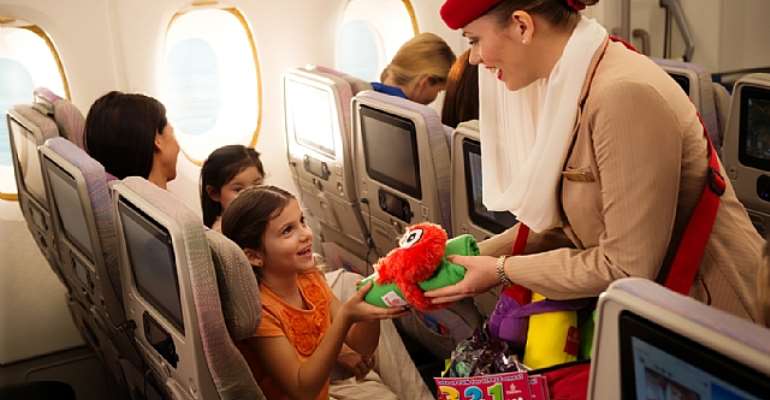 With the busy summer holidays on the horizon, Skytrax's World Best Airline, is pulling out all the stops to keep the young ones entertained both in the air and on the ground.

Even before departure, complimentary baby strollers and changing tables are available within Emirates' dedicated Terminal 3 and there are play areas equipped toys within Emirates' exclusive lounges. Priority boarding is provided to families with young children.

But it's on board when the real fun starts. The dedicated children's channel on the popular ICE entertainment system brings an array of cartoons, interactive games, podcasts and CDs.

There are currently more than 60 children's movies on ICE, including the entire Harry Potter series, a whole section dedicated to Disney Classics, plus over 20 dedicated children's television channels including CBeebies, Disney Junior, Cartoon Network and Nickelodeon. The young ones can also immerse themselves in hours of the very best music, such as One Direction, Justin Bieber and Katy Perry.

On board, young flyers can meet AirBoe and Oggie, amongst the new cuddly monsters and explore activity-filled backpacks, all provided on a complimentary basis. Aircraft also carry kids' favourite meals, as well as vegetarian options.

'We go to great lengths to entertain and occupy children with products and services that are constantly being updated and enhanced,' said Sheikh Majid Al Mualla, Emirates' Divisional Senior Vice President, Commercial Operations, and Centre. 'We know keeping the young ones happy is a key part of ensuring a smooth and enjoyable travelling experience for the whole family so investment in this area is very important.'

Emirates recognises that loyalty is essential amongst its younger customers too so children even have their own frequent flyer programme called Skysurfers. Miles can be exchanged for free flights, toys, books and entry to attractions in Dubai.

For those more interested in the operational side of the adventure, children can watch the Airshow channel to see a pilot's view of take-off and landing, while following the aircraft's progress across the globe.

Emirates Holiday's, meanwhile, is well equipped to deal with families with specially-tailored packages. Many of the hotels available through Emirates Holidays offer kids' and teens' clubs.

Notes to editors:
*As per ticketing rules on emirates.com a child is defined as a passenger between 2-11 years of age.

Fly with Me Monsters toys with blankets, Sketchers and seatbelt critters

Children's facilities in the airport lounges