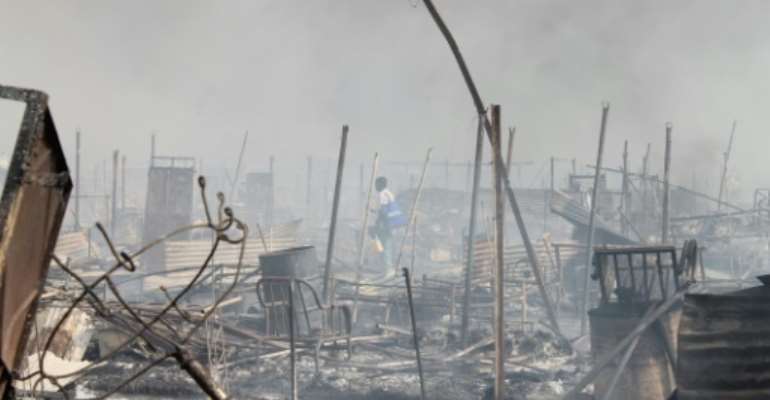 People walk among rubble in an United Nations base in the northeastern town of Malakal on February 18, 2016. By Justin Lynch (AFP/File)

United Nations (United States) (AFP) - UN peacekeepers abandoned their posts and questioned an order to use force to repel heavily armed soldiers who stormed their base in South Sudan six months ago, according to the findings of a UN board of inquiry released Friday.

The board set up by UN Secretary-General Ban Ki-moon found that the mission "failed to manage the crisis effectively" when its base in the northeastern town of Malakal came under attack on February 17 and 18.

About 30 people sheltering in the Malakal base were killed in the violence and 123 injured.

The board said there was a "combination of causes" that led to the violence, including tensions between Shilluk, Dinka and Nuer ethnic groups who make up the 48,000 people living at the Malakal camp.

It concluded that it was "highly likely" that government forces planned the attack or at the very least supported local militia "to facilitate the ethnic reconfiguration of Malakal."

The violence erupted just hours after UN peacekeepers had confiscated weapons from two men trying to break into the UN base. During questioning, the men identified themselves as government soldiers.

After clashes erupted, targeting the Dinka sector, South Sudan soldiers stormed an entrance to the base.

Some 30 minutes later, peacekeepers on guard duty found themselves "unable to stop the intruders" and "abandoned their positions," the board said in a summary of its report released to the press.

A UN commander ordered troops to "engage the SPLA troops by firing back on them and (said) that under no condition should SPLA soldiers" enter the main base.

The SPLA is the Sudan People's Liberation Army, originally part of a guerrilla movement but now the country's regular army.

"Some troop commanders hesitated about the use of lethal force and sought written authorization for it," the report added.

The order was reissued by the mission's headquarters in Juba, and about two hours later the peacekeepers began an operation to push the gunmen out of the base.

The board also found that the peacekeepers failed to quickly repair a breach in a fence that could have been used to smuggle weapons into the camp.

"This combination of inaction, abandonment of post and refusal to engage made the situation harder to contain and contributed to the negative effects of the incident," the inquiry found.

Malakal is one of eight UN bases providing a haven since the war in South Sudan began in late 2013. The bases, sheltering around 200,000 people, are protected by razor wire and no weapons are allowed in them.

About 1,200 peacekeepers from the mission known as UNMISS are deployed at the compound in Malakal.

The board found that the United Nations had set "unrealistic expectations for the protection that UNMISS could feasibly afford" to the 48,000 displaced civilians living at the Malakal camp.

Two persons accused of killing 11-year-old boy at Kasoa to b...
52 minutes ago

Akufo-Addo can’t even bath in the Presidential jet, it's not...
52 minutes ago