More On How Chris Asher Conned The NRC 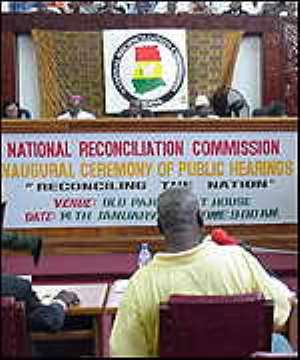 Gye Nyame Concord can confirm that Asher misled the NRC into believing that he had handwritten materials from fellow fugitive, Lance Corporal Samuel Amedeka in his petition to the NRC only to appear in person to tell them that those materials had been robbed off him 20-years earlier.

Information also indicate that though Asher's claim of having the recorded materials was made in his written petition on April 13, 2003, he told the NRC during his melodramatic appearance on August 21, 2003 that the documents in question got missing during his refugee days in West Africa after he escaped from the Nsawam Medium Security Prisons in 1984. The 67-year-old Asher was serving a 10-year prison sentence for insurance fraud at the time.

Interestingly, Asher had assured the NRC in his April 13, 2003 petition and subsequent interaction, according to NRC Executive Secretary Dr Ken Attafuah, that he had kept the handwritten statements of not only Amedeka, but Johnny Gyandu, one of those convicted and executed for the murder of the three High Court judges and the retired Army officer.

He claimed, according to Dr Attafuah, that he had kept the documents over the past twenty years and would avail them to the NRC if he was given the opportunity to testify.

To top it up, Ghana's infamous fugitive also claimed that the handwritten statements had been the basis for an amnesty claim by him in London, UK, and that he would be able to produce that as well.

“… Indeed he did say that those statements had been the basis for an amnesty claim in London and he had been granted that… And that he can produce it. But in addition, that he had made contemporaneous, I mean he had recorded his recollection of their statements to him at the time that they told him. So it wasn't like something that he recorded twenty years later, but contemporaneous evidence; evidence recorded at a time close to the disclosures as possible.”

The cardinal reason for Asher's immunity to appear at NRC was because of these claims which the NRC had initially believed, sources close to the NRC told this paper.

Asher's turn-around on his Amedeka claim raised informed speculation that he indeed knew he did not have any documents from Amedeka to avail to the NRC but chose to con the commission into believing that he had them to facilitate his return to Ghana, especially when he requested for the immunity to avoid being hounded over allegations that he had murdered one Emmanuel Ofori Atta in the early 80s.

The Executive Secretary of the NRC, who was speaking on the Accra-based Choice FM's Strict Proof programme exactly a fortnight ago, admitted that although Asher “did state that he had handwritten statements of both Johnny Gyandu and Lance Corporal Amedeka in his petition to the Commission”, he told the NRC on oath that he did not have the handwritten statement of Amedeka.

According to Dr Attafuah, Chris Asher availed a statement from Gyandu, which the NRC has confirmed through forensic test to be that of the late murderer.

Gye Nyame Concord sources have however told this paper that the document tendered by Asher in Gyandu's handwriting could not have been documents Chris Asher claimed to have accessed in prison since they were documents tendered during the SIB investigations into the murders of judges and the retired Army officer.

Continuing, Dr Attafuah noted on the programme that the NRC was yet “to decide whether Mr. Asher's evidence disclosed such compelling novel evidence as should be assessed, be believed or not”

He was unwilling to make a judgement on whether Asher conned the NRC, admitting however that truth commissions the world over have had “people who will either in their statements or oral testimony misrepresent the situation, lie, con, deceive even under oath”.

He explained that the NRC granted Asher immunity based on his claim that whilst in Nsawam with Gyandu and Amedeka, they made certain revelations to him in their handwritings confirming the alleged complicity of key persons in the then PNDC government in the gruesome murder.

“The Commission was persuaded that if Mr. Asher had the information he claimed to possess, then it would be extremely useful to the Commission and therefore warranted his being given a safe passage to appear before the Commission.”

He said the NRC came to that conclusion based on its appreciation of the essence of the rules against hearsay evidence.

On when hearsay evidence was necessary for a tribunal or a court to accept, Dr. Attafuah said what the courts within the common law system have come to, was that hearsay evidence must be accepted as long as it met the criteria or requirement of necessity and reliability.

In Chris Asher's case, he said the NRC had no evidence that Amedeka was preparing to come to Ghana any soon to assist it and that once Johnny Gyandu was dead, the NRC thought that “if indeed he had the evidence he claimed he had, then it will be both necessary and reliable”.

As it turned out when Chris Asher came to town to give his evidence under oath, the NRC found out that contrary to his assertion of bringing them Amedeka's statement, the runaway convict only came to engage in high drama without availing them the statements that had been key for getting him the limited passage into Ghana.

Dr Attafuah also indicated that when the request of immunity came from Asher and was being considered, the former chief of Osoroase arrived in Ghana and reported at the NRC office “when we had not granted him immunity'.

“So we requested the security agencies to ensure his protection from arrest, harassment until he could testify before the NRC and that was exactly what we ensured.”

Asher attempted on September 22, a day before the expiration of his immunity, to get the NRC to get him an extension via a verbal request for the Commission to extend his security cover until October 12th 2003. The NRC however asked him to formalise his request in writing, Dr. Attafuah said.

It later found the reasons Chris Asher gave for the immunity extension untenable and refused his request.