June 4th Is Still Relevant!! Let's Celebrate With Rawlings And His Men 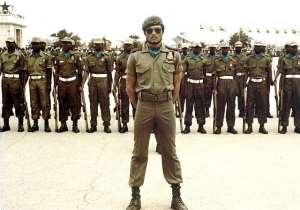 June 4th 1979 was the date the able men of the Armed forces came to power in a coup d'etat that saw the removal of the Supreme Military Council.That day was preceded by an arrest of Flt.Lt. Jerry John Rawlings " the true revolutionary" and other military men on May 15,1979 for a failed coup.

Inspired by Jerry John Rawlings for showing bravery even at the point of death,young officers and other officers forcibly released him and his men on the morning of June 4th 1979.

The June 4th Revolution or June 4th Uprising was a popular uprising in Ghana in 1979 that arose out of a combination of corruption, bad governance, lack of discipline in the army and frustrations in the army and among the general public. It was sparked when the then military government of the Supreme Military Council (SMC II) of General F K. Akuffo put flight Lieutenant Jerry John Rawlings on public trial for attempting to overthrow the government on May 15th 1979.

Jerry John Rawlings turned the trial against the government by accusing it of massive corruption and requesting that his fellow accused be set free as he was soly responsible for the mutiny(leave my men alone).What a leader!!. His diatribe resonated with the entire nation as there was massive suffering.

In the night of June 3rd 1979, junior military officers broke into the jail where Jerry John Rawlings was being held and freed him, and ostensibly matched him to the national Radio station to make an announcement. The first the public heard from Jerry Rawlings was now legendary statement that he Jerry Rawlings had been released by the junior officers and that he was under their command. He requested all soldiers to meet with them at the Nicholson stadium in Burma Camp in Accra.

The entire nation went up in uproar. To some of us loyal to Jerry Rawlings,June 4 uprising was the most significant event on the nation's political calendar apart from the achievement of independence.

The uprising has to be memorised because the revolution fought corruption, greed, nepotism and many other canker at that time and it's still relevant today. Celebrating June 4 should be a time of reflection on the issues that brought about the revolution.

Our leaders should use June 4 to rebuild the confidence reposed in them, fight corruption and create more jobs for the youth.

Most of us, young politicians this days, get carried away by the order of the day; business as usual and refuse to challenge the status quo. But how can we make progress if the degradation of our political moral fabric is endorsed with no questions asked about the procedural flaws in the award of contracts on behalf of our dear nation?

We have a lots of work to do to be able to change this country. I will like to use this period to seek support or appeal to the former president to establish a well organized school where his ideology could be share among the youth. May the souls of these great men who laid their lives for this country on this great day rest in perfect peace. Long live Flt Jerry John Rawlings!!!,Long live Ghana!!!.