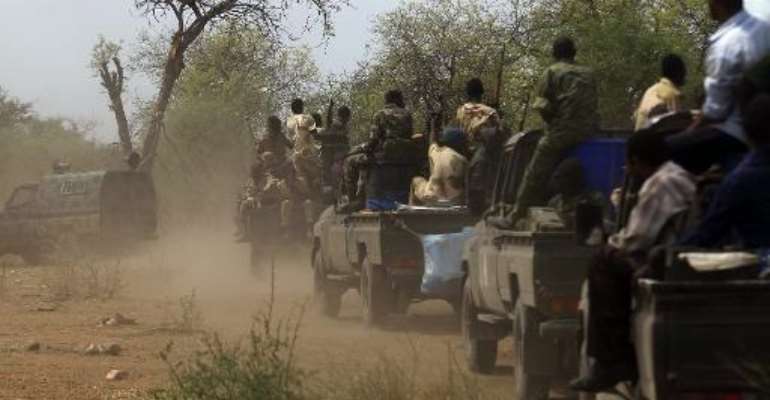 Sudanese soldiers patrol the Daldako area, about 20 km northeast of South Kordofan's state capital Kadugli, after recapturing it from rebels, on May 20, 2014. By - (AFP/File)

Khartoum (AFP) - At least 41 people have been killed in clashes between rival Sudanese clans over the ownership of land being explored for oil in West Kordofan state, a tribal source said.

Another 13 people were seriously wounded in the fighting that raged through to Sunday between the Zurug and Awlad Amran clans of the powerful Misseriya tribe, the source told AFP.

Those involved in the clashes used Kalashnikov assault rifles and rocket propelled-grenades.

A witness, who declined to be named, said the fighting broke out as each group claimed ownership of a plot of land where drilling for oil is underway.

It also neighbours the western region of Darfur, where the army and allied tribes have since 2003 battled rebels demanding an end to economic marginalisation and power sharing with the Khartoum government.

Militias, rebel splinter groups and armed tribes operate in the region, where gunmen abducted two Chinese and an Algerian from an oilfield in April. The three were released in May.

But fighting between tribes is frequent in Sudan, and often breaks out over grazing rights.

The Misseriya is a semi-nomadic Arab tribe that raises cattle.