Health alert: Fishermen in Lower Axim use DDT for fishing 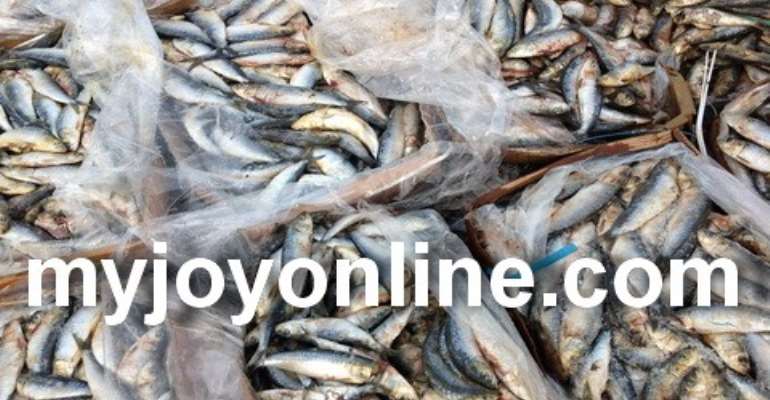 Fishermen in Lower Axim in the Western Region have resorted to the use of DDT, carbide, dynamite and light for fishing.

The result is that most of the fishes are brought to the shore dead and discoloured, with broken flesh and sunken eyes, indications that they are not fresh.

There are fears that the practice maybe widespread along the west coast of the country.

According to the Chief Fisherman at Lower Axim, Nana Kojo Eshun, the fishermen usually  use light to attract the fish, while DDT, carbide and dynamite are used to increase the catch.

Apart from the obvious health implications for fish consumers and processors, the practice is also deepening poverty among fishermen and fishmongers, largely women, as the quality and quantity of fish are adversely affected after smoking.

A fishmonger, Madam Hannah Donkor, is not happy about the situation.

“The fish caught using light is okay but the ones by chemicals are creating a lot of problems for us," she stated.

She said some of the fishmongers had incurred huge debts as a result and explained that the dynamite and carbide methods of fishing caused fishes to rot soon after catch.

According to Madam Donkor, the fish caught with such chemicals also breaks into pieces when exposed to smoke and heat, thereby affecting prices and sales.

The use of chemicals such as DDT and carbide poses a serious health hazard to fish consumers.

Some of the chemicals have had dire consequences on the fingers of some fishmongers.

Health experts say eating food with large amounts (in grammes) of DDT over a short time will most likely affect the nervous system.

People who swallow large amounts of DDT become excitable and have tremors and seizures.

They also experience sweating, headache, nausea, vomiting and dizziness. The effects on the nervous system go away once the exposure to DDT is stopped.

Axim is a coastal town and capital of the Nzema East District in the Western Region.

It lies ,64 kilometres west of the port city of Sekondi-Takoradi to the west of Cape Three Points.

Lower Axim is a major fishing town, with as many as 1,500 canoes.

According to the Secretary of the Lower Axim Fishermen Association, Mr Micheal Nokoe, “any type of fish can be found at Axim”.

Mr Nokoe stated that there was a time when the fishermen were made to swear to the sea that they would not use the chemicals again, but the situation had changed “and many of us are using these chemicals today”.

“Unfortunately, we cannot stop our people because they also need to survive. But we are ready to stop if the government is able to stop all fishermen from the practice,” he said.

Nana Eshun described the illegal fishing practices as a major problem affecting the survival of the fishing industry.

Addressing the problem was not beyond the fishermen association in Lower Axim, he stated but he was quick to add that it was the responsibility  of the government  to assert its authority to hald illegal fishing practice in the country's waters.

"As the chief fisherman here in Axim, for instance, we can tell them to stop and they will stop today, but we are in the same Ghana; while other fishermen are using those illegal methods, we cannot stop doing same and go hungry,” he stated.

“If the government puts its feet down, we will help it stop the illegal fishing practices,” he stated..

DDT is a pesticide that was once widely used to control insects on agricultural crops and insects that carry diseases such as malaria and typhus but is now used in only a few countries to control malaria.

Before 1973 when it was banned, DDT entered the air, water and soil during its production and use as an insecticide.

DDT is present at many waste sites. It does not occur naturally in the environment.

After 1972, the use of DDT was no longer permitted in the United States, for instance, except in cases of a public health emergency.

It is, however, still used in some other areas of the world, most notably for controlling malaria