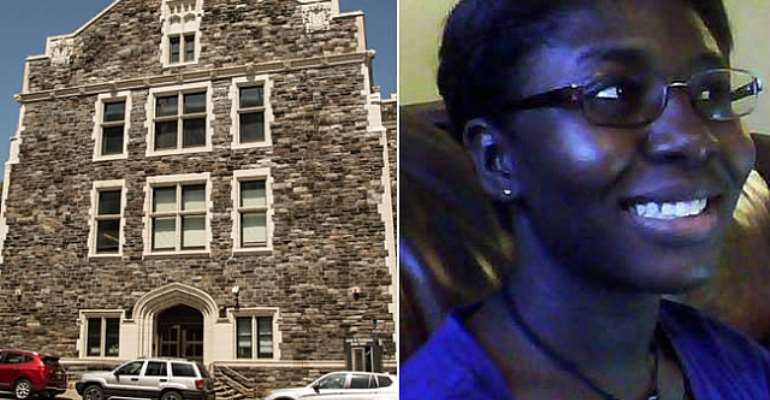 A bright student at a top city high school was humiliated in front of her classmates for cheating on a test — and was so ashamed that she jumped to her death in the Hudson River Thursday, sources told The Post.

Omotayo Adeoye, 17, of The Bronx, wrote a suicide note right on her German-language exam that read, “I just want to go away forever on the bottom of the river,” law-enforcement sources said.

Divers were still searching Friday night for the biology whiz in the waters off Washington Heights, where she jumped in Thursday afternoon.

odal Trigge
Adeoye's teacher, Eva Malikova
The promising senior was caught peeking at her cellphone during the German test at the Harlem HS for Math, Science and Engineering, which is affiliated with the City College of New York.

Her teacher, Eva Malikova, “was walking around the room and saw [Adeoye] on her phone,” a male classmate said.

“Oh, you are not really sorry,” Malikova allegedly snapped back. “That's not a sincere apology!”

At around 2:15 p.m., a teary-eyed Adeoye scrawled her desperate note on the test, then asked to use the bathroom.

She never returned — instead walking from the West 140th Street school to the Hudson River's edge at West 165th Street.

Shocked fishermen watched helplessly as she placed her ID on a rock, then jumped in the water.

Modal Trigger
NYPD searches the Hudson River.Photo: Warzer Jaff
She appeared to be forcing herself down, they said.

Her head bobbed briefly above the surface before she was completely submerged.

A Department of Education spokeswoman said, “We are conducting an investigation into this tragic incident, and we are taking immediate action.”

She said the DOE would do more to address mental-health issues with students.

Malikova could not be reached for comment, but several students said they heard her screaming in anguish at the school this morning.

She did not teach any classes.
If it is confirmed that Adeoye killed herself, it would bring the total number of public-school student suicides to 14 so far this year, the DOE said.

“Our thoughts and prayers are with her family and her school community,” said Schools Chancellor Carmen Fariña. “This must be a call to action.” Story by nypost.com/