Tanzania: on the front line of the war against poaching 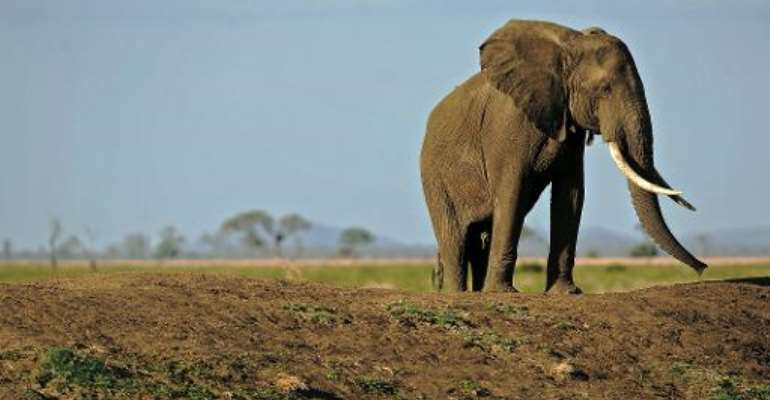 Dar es Salaam (AFP) - Apollo Kwilabya has loved the outdoors ever since he was a young boy, hunting small animals with his father in Tanzania's southern highlands.

It is also the reason why he signed up as a ranger at Selous Game Reserve, where although he earned a modest $200 dollars a month, he could spend most of his time on patrol in one of the largest wildlife reserves in the world.

But his dream job quickly turned into a nightmare: Kwilabya said he was rarely paid on time, and around him his fellow rangers were killed off one-by-one.

One was killed by a propeller when a hippo overturned a patrol boat, another was bitten by a green mamba, a third was out fishing when he was grabbed by a huge crocodile, another was trampled by an elephant, while the fifth fell to the deadliest enemy: the poacher.

"I thank God that I'm alive," said Kwilabya, who quit his job after three years and moved to Dar es Salaam to become a tour guide.

"That day we were chasing the poachers, and they would just shoot and run, shoot and run. Everyone was shooting. It's like a war."

This particular poacher was hunting elephant for ivory and, like most, was from one of the small, poor communities that border the park. But Kwilabya said the poachers are clearly well-equipped and funded, brandishing brand-new automatic rifles that put the rangers' firepower to shame.

If it is a war, the conservationists are losing. A third of all illegal ivory seized in Asia comes from Tanzania, and the safari tourism destination has lost over half of its elephants in the last five years, according to the Tanzanian Elephant Protection Society (TEPS).

There are 60,000 left but, if poaching continues unabated, Tanzania may see all of its elephants eradicated by the year 2020, TEPS warned during an anti-poaching summit in Dar es Salaam earlier this month.

The problem is particularly pronounced in the Selous Game Reserve, which was made a UNESCO World Heritage Site in 1982 when more than 100,000 elephants roamed the area. By 1989 the elephant population had plunged to 30,000.

Benson Kibonde has spent over 30 years protecting the park, and was Selous' Chief Warden from 1992 to 2008. During his tenure, the elephant population more than doubled, climbing back up to 70,000, thanks also in part to an international ban on the sale of ivory.

But something went seriously wrong after Kibonde left Selous to become an instructor at Pasiansi Wildlife Training Institute. Pay checks went unpaid for months at a time, infrastructure fell into disrepair and morale dropped, according to Kwilabya and other rangers. The elephant population also plummeted to just 13,000 animals.

Kibonde was called out of retirement, and has been back in charge of Selous since 2012.

"Based on the poachers we've been arresting recently, I can assure you that they are as local as I used to know in the past," he told AFP in Dar-es-Salaam, Tanzania's commercial capital. "So it's still traditional. And I think we can stop them using traditional means."

The technique that Kibonde employed since the 1990s -- and the one he plans to continue now -- simply involves ensuring that rangers are everywhere. He does this by giving the scouts a map, GPS, rifle, backpack and a small tent, and sending them off on random patrols.

"They visited parts of the reserve that no one had ever gone to before. That's when we realised that we still had rhinos, because they bumped even into rhinos," he said.

"We need to commit boots on the ground, that's the only thing that will save the elephants."

Selous currently has about 285 rangers, but the effective number in the bush at any given time may not be any more than 150 -- all covering 55,000 square kilometres (21,000 sq. miles) of wilderness, an area well over twice the size of neighbouring Rwanda.

To add to these numbers, the Tanzanian government recently announced plans to train 1,000 new park rangers and buy four helicopters, with much of the money coming from the Howard Buffet Foundation.

Aside from aid money, which has been rolling in since news of the devastation in Selous became widespread, more money will be raised for the park by making the Tanzania Wildlife Authority (TAWA), the department that oversees game reserves like Selous, independent of government.

Currently, Selous only keeps 50 percent of the revenue it generates from tourism with the rest going to the government. When TAWA is up and running, which should happen by January 2015, the reserve will reinvest 100 per cent of its revenues into conservation.

The independent authority will also cut down on red tape and having to deal with government bureaucracy, which conservation groups have accused of corruption either by taking bribes or being involved with poaching themselves.

Along with his role as chief warden, Kibonde is also the chairman of the task force overseeing the establishment of TAWA.

"The worst case scenario is the status quo, so it can only be better," he said.

"I'm not so worried. With the 13,000 elephants that we have in Selous, if we commit our hearts and minds seriously, which I'm trying to get in the thinking of the scouts, we will be fine."