Is Changing #BringBackOurGirls To #ReleaseOurGirls Part of The Transformation Agenda? 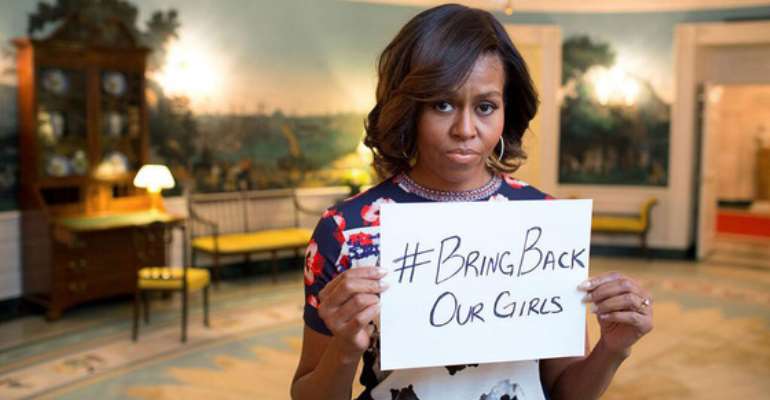 It means a lot to Nigeria's president that the world stops protesting and requiring it of him and the nation's security service to rescue over 200 girls abducted since mid April this year. President Goodluck Jonathan appears more and more everyday to simply wish this could just go away and everyone forget these poor girls in Sambisa forest; after all, 'they are not the first to have been kidnapped and forgotten with Boko Haram and they are not likely to be the last during his administration, so why all the hullabaloo?'

Towards this end, the government of Nigeria has invested billions; it can be imagined, in an eleventh hour campaign to transform the face of the Nigerian protest. Nigeria's president has been advised to invest in attempting to use #ReleaseOurGirls to replace #BringBackOurGirls, which has been perhaps the most viral and globally participated hashtag protest of all times, with public figures including Michelle Obama, the United States president's wife prominently and passionately getting publicly involved.

Why is the president of Nigeria being advised and investing so much in fighting to transform #BringBackOurGirls to #ReleaseOurGirls. Is there so much in a 'mere' name and a hashtag?

#BringBackOurGirls puts pressure on the Nigerian and international security departments to ramp up efforts and harness all equipment and skills at their disposal, to rescue the abductees. #Release Our Girls however reads as a position of surrender and resignation. #Release Our Girls is a message for one ear and one ear alone, that of the terrorists. When a nation hires miscreants to protest and cry for terrorists to have mercy; what image does this portray? A nation on its knees? If the entire nation joined the #ReleaseOurGirls campaign, in what way will this plea affect Boko Haram or the desperate predicament of our abducted girls? Has a begging nation ever touched a terrorist's heart? If not so then why would the Chibok committee and all other advisers of the Nigerian president further humiliate him and his plight and the plight of the nation as a whole with this meaningless counter-campaign?

Are Nigeria's president's advisers not aware that the world is watching and noticed how his government initially challenged and denied the abduction, then lied, as the Economist candidly put it, that Nigeria's security agents had rescued all but eight girls; and when this was humiliatingly exposed, now employ all tactics of intimidation, harassment, diversion and terrorist begging as avoidance strategies in the face of embarrassing terror and terror response?

#ReleaseOurGirls is really a reason for concern. Is there any sensible reason why money that could be used to aid the hunt for the missing girls and to console and rehabilitate the people of Chibok is being wasted in sponsoring a humiliating, violent counter campaign?

The entire world is watching. Seriously, the obvious #ReleaseOurGirls distraction is not a good look, Goodluck.

Dr. Peregrino Brimah for http://ENDS.ng [Every Nigerian Do Something]