High-level UN meeting in Kenya on despite security fears 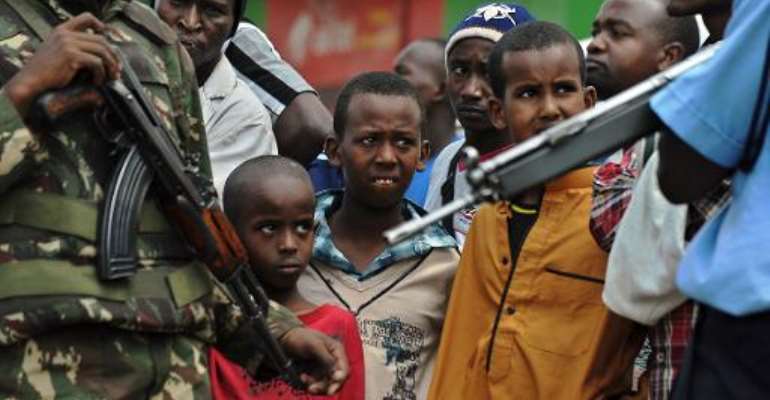 Police control a crowd as officers inspect a vehicle suspected to be packed with explosives, on April 24, 2014 in Nairobi. By Tony Karumba (AFP/File)

Nairobi (AFP) - The United Nations said Thursday a major environmental conference would go ahead in the Kenyan capital next month despite mounting security fears and travel warnings from several nations.

UN Secretary-General Ban Ki-moon, close to 100 ministers and a total of 1,200 delegates from around the world are due to attend the first ever UN Environment Assembly (UNEA) in Nairobi from June 23-27.

"My confidence in Kenya is unshaken," Achim Steiner, a UN Under-Secretary-General and head of the UN's Environment Programme (UNEP), the host of the event, told reporters.

"It is also the responsibility of the international community not to be intimidated. This is a signal that our work is not compromised by issues of insecurity," he said.

Nairobi as well as the port city of Mombasa have been the target of a string of bomb attacks in recent months blamed on Islamic militants with ties to Somalia's Al-Qaeda-linked Shebab rebels, prompting the United States, Britain, France and Australia to issue new travel warnings.

The US embassy in Nairobi, which is located opposite the huge UN headquarters, has also raised security and is in the process of cutting staff numbers, while UN sources have said security at their compound has also been tightened.

But Kenya's Permanent Representative to the United Nations, Martin Kimani, said security was a "top-priority issue" ahead of the UN meeting.

"Kenya is taking every measure to ensure the success of this landmark event," he said.

Other prominent dignitaries expected to attend the UNEA meeting include Prince Albert II of Monaco and John Ashe, President of the UN General Assembly.

UNEA is being touted as the UN's highest-level platform for decision making on environment and is tasked with charting a new course in the way the international community addresses global environmental issues.