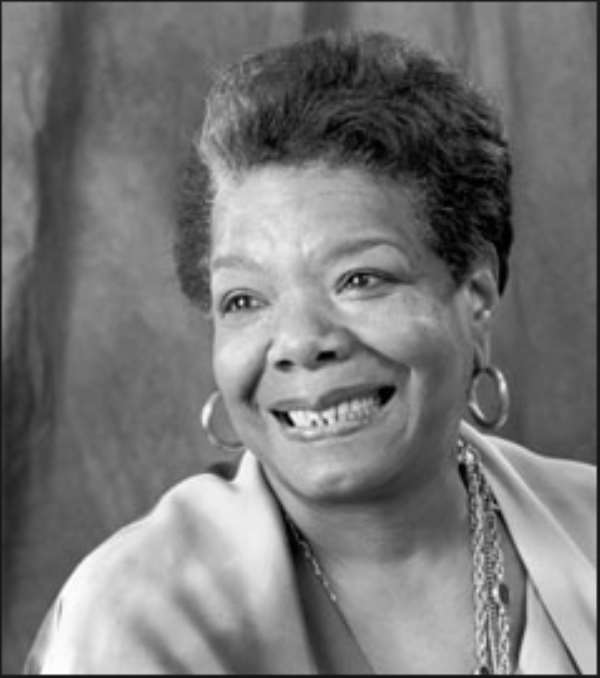 This morning, May 28, 2014, I woke up with a heavy heart, and with deep sorrow to hear in the news that Dr.Maya Angelou, a modern Renaissance woman who survived the harshest of childhoods to become a force on stage, screen, the printed page and the inaugural dais, has died. She was 86. Maya was one of the strongest civil rights towers of all time,and has had a profound influence in the lives of so many young black people.

She's a Poet, performer and political activist.Dr. Maya Angeloudied at her home in Winston-Salem, North Carolina, USA. She was 86!But first, let me give a brief biography about her, since her background influenced her in greatly in her legacy.

Growing up in St. Louis, Missouri and Stamps, Arkansas, she was known as Marguerite Ann Johnson. It was her brother who first called her Maya, and the name stuck. Later, she added the Angelou, which is a version of her first husband's name.Dr. Angelou attended high school in San Francisco, and studied dance and drama.

What is unique about her life was that at the age of 14, she dropped out of school and became the city's first African-American, female street car conductor. Fortunately for her, she later graduated. Dr. Angelou unquestionably stood tall and regal, with a deep, majestic voice. In fact, she defied all probability and category becoming one of the first black women to enjoy mainstream success as an author and thriving in virtually every artistic medium. Shelater wrote and recited the most popular presidential inaugural poem in history and also wrote a million-selling memoir, befriended Malcolm X, Nelson Madiba Mandela and Rev. Martin Luther King, Jr., and performed on various stages around the world.

As an actress, singer and dancer she finally broke through as an author in 1970 with "I Know Why the Caged Bird Sings," which became standard reading, and was the first of a multipart autobiography that continued through the decades. In 1993, she was simply sensational reading her cautiously hopeful "On the Pulse of the Morning" at former President Bill Clinton's first inauguration. Her confident performance openly delighted Clinton and made the poem a best-seller, if not a critical favorite. This superb performance also impressed the former President George W. Bush to an extent that, she read another poem, "Amazing Peace," at the 2005 Christmas tree lighting ceremony at the White House.

Some of you might not know this fascinating thing about her, but she loved Africa and considered herself as an African.Why? It's boldly posted on her website that in 1960, Dr. Angelou moved to Cairo, Egypt where she served as editor of the English language weekly 'The Arab Observer'. Thenin 1961, she moved to Ghana where she taught at the University of Ghana's School of Music and Drama, worked as feature editor for The African Review and wrote for The Ghanaian Times. During her years abroad, Dr. Angelou read and studied voraciously, mastering 5 different languages including French, Spanish, Italian, Arabic and the West African language Fanti. While in Ghana, she mingled and associated with the indigenous folks to an extent that some of them names their children after her.

For most people, 'Maya' will be remembered about her inspiring36 books, and her poems, of course! Personally, I always think about her altruistic voice in her writings, her voice to rescue the perishing youth from hopelessness, her captivating voice to give hope to the despair and despondency young black people, her comforting voice which has inscribed an indelible sense of humor and humility in some of us, her voice of courage to speak up as a young lady even in the mist of the pain of segregation, her voice to inspire some of us to develop an art of writing irrespective of your profession, her innovative voice to the young black people to unite and think independently, her voice of peace, and her positive voice of eschewing complacency and selfishness! .

On March 5, 1988 in her unforgettable interview with USA TODAY she's quoted as saying 'One isn't necessarily born with courage, but one is born with potential. Without courage, we cannot practice any other virtue with consistency. We can't be kind, true, merciful, generous, or honest." Yes that's absolutely true!Please, smile wherever you are, and be proud even in your interment that, some of us clearly understood you, took it up, built on it, lived by it, practiced it, and we will never forget the fact that you inspired us not only to be kind, honest and sincere, but also be courageous and strong in what we stand for. I've personally read a lot about you not only on how to speak up, but more importantly, how to speak our meaningful mind! 'Maya', the youth of Africa, especially your 'students of independent thinkers' are very grateful to you and the consummate legacyand principles you left behind.

'Maya', it's true that no single human being ever born on earth or will be born in the future can fix all the problems in the world, but certainly and without qualm, you've done your part. Your part through your writings, your outstanding 36 books, and poems, and dance, and musical dirges!Dr. Maya Angelou, you did bring about a paradigm shift in American literature and culture, and we will never forget YOU and your LEGACY!

Wherever you are, wherever you go, and whatever you are doing, remember that anytime we hear'that voice' which you stood for, we'll make sure, that voice captures a humanity, and that voice will calm us in so many ways through some of the most significant challenges in our lives. We will certainly 'press on' because you told us to do so!

In 2011, Dr. Maya Angelou wrote on her Facebook: 'My mission in life is not merely to survive, but to thrive; and to do so with some passion, some compassion, some humor, and some style." Oh yes, I almost forgot this, and yes indeed! As you wrote "Love recognizes no barriers. It jumps hurdles, leaps fences, penetrates walls to arrive at its destination full of hope." YES!That'show it benefited some of us, and that's how that message got to us! We promise to pass it on, even though the world faces enormous and unprecedented challenges than ever.

As the famous and another pillar of our age, Oprah Winfrey sums it up: You were a great 'Mentor and Teacher'!

Dr. Maya Angelou, I'm proud to tell the world that; you taught me to feel and know that, even in my despair, in my worst fears, in my dark days as a young African international student in America, in my failures, in my mistakes, in my challenges, in my travails, in my struggles, in my pain, and when all hope was lost, it was Dr. Maya Angelou who taught me as a student and young man to realize that , 'You may not control all the events that happen to you, but you can DECIDE

NOT TO be reduced by them."- quote from 'Letter to My Daughter, a book of essays (2009). I'll never ever forget that quote, because I'm who I'm today, partly because of those rousing and inspiring words of yours. What else can I say to honor you? Maya, YOU WERE LITERARY GIANT!! YOU WERE SIMPLY A PHENOMENAL POET OF ALL TIME!