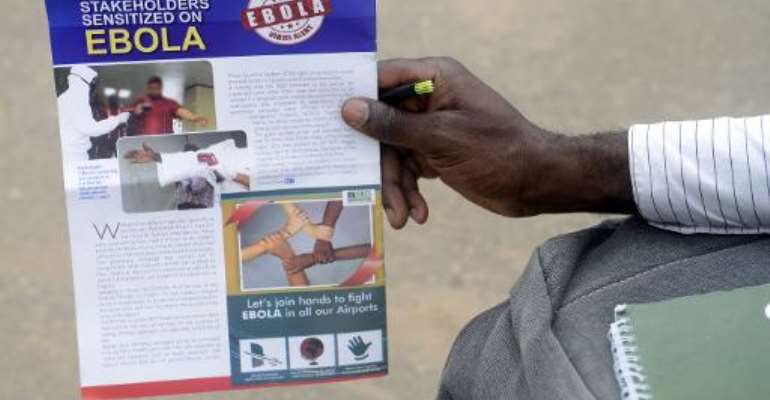 A worker holds a flyer on the Ebola virus at the Murtala Muhammed International Airport in Lagos, Nigeria, on August 11, 2014. By Pius Utomi Ekpei (AFP/File)

Abuja (AFP) - Nigeria on Monday revised down the number of confirmed Ebola cases in the country to 13, including five deaths, blaming the reporting of a 14th case on a false positive.

Health minister Onyebuchi Chukwu said there were three people currently being treated at a special isolation unit but that one was "for imminent discharge after necessary protocols".

All five deaths from Ebola and confirmed cases have occurred in the country's financial capital, Lagos, from a single chain of transmission.

They include the first case -- Patrick Sawyer, a Liberian-American who died at a private hospital on July 25 -- and three medical workers who treated him.

An official from the West African regional bloc ECOWAS, who picked up Sawyer up from Lagos airport and took him directly to hospital, also died.

Chukwu announced on Friday that the husband and wife of two medical workers who died were also confirmed as having Ebola -- the first cases of secondary contact in Nigeria.

Five people who caught the deadly virus, which has killed 1,427 since the start of the year, mostly in Guinea, Sierra Leone and Liberia, were treated and discharged, he added.