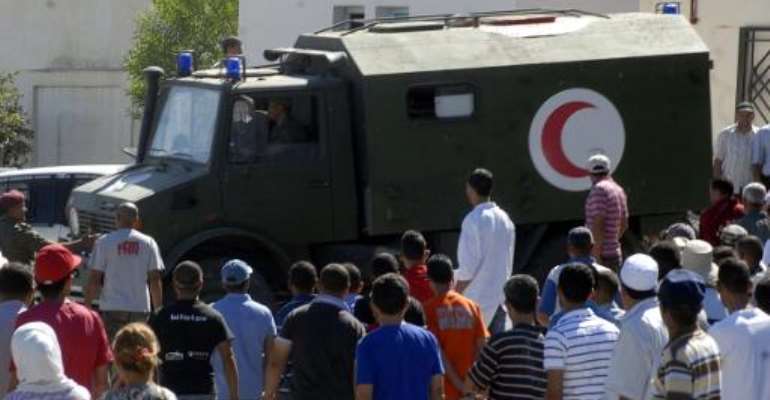 An Army ambulance carrying Tunisian soldiers, injured following an attack near the Algerian border, arrives at a hospital in Kasserine on July 17, 2014. By Rzouga Khlifi (AFP)

Tunis (AFP) - Assailants have killed 14 Tunisian soldiers near the Algerian border, the government said Thursday, in the worst such attack in the army's history as it presses a crackdown on jihadists.

The attack took place in the Mount Chaambi region on Wednesday evening as the soldiers were breaking their day-long Ramadan fast.

Fourteen soldiers died, 18 were wounded and another went missing, making it the heaviest toll inflicted on the army since Tunisia's independence in 1956, the ministry's press office told AFP.

One of the assailants, a Tunisian, was killed in the fighting, and there were also Algerians among them, the army said.

But few other details have yet emerged about the armed group.

The ministry has previously insisted that militants the army has been hunting since late 2012 in the remote western border region are linked to Al-Qaeda in the Islamic Maghreb (AQIM).

The army said nine of the soldiers had burned to death and vowed to wage "open war" on terrorism.

"These attacks cost us 14 martyrs. Five were hit by bullets and nine were burned ... when the tent they were in caught fire," after it was hit by grenades, the army's head of ground operations, Souheil Chmengui, told a press conference.

"This is open war. The war of a country and a people against an evil," he said, pledging to combat terrorism "day and night".

The army's chief of staff, Mohamed Salah Hamdi, said it was unclear if the missing soldier had been killed, wounded or taken hostage.

The attacks came almost a year to the day after the bodies of eight Tunisian soldiers were found, some of them with their throats slit, after being ambushed in the western Kasserine region.

Since the 2011 revolution that toppled Zine El Abidine Ben Ali, Tunisia has been rocked by violence blamed on hardline Islamists who were suppressed under the former dictator.

The country has made tangible progress this year in terms of stability, and elections are due to take place in just over three months, after political turmoil in 2013 triggered by the assassination of two opposition politicians.

In January, after a tense standoff between rival factions, parliament finally adopted a new constitution and the ruling coalition led by moderate Islamist party Ennahda resigned, allowing for the formation of an interim administration of independents.

But the jihadist threat has cast a shadow over any political gains.

Four Tunisian soldiers were killed by a land mine in the northwest Kef region during an anti-terror operation earlier this month, a day after four soldiers and two policemen were wounded by a roadside bomb in the same area.

Last month AQIM, the global terror network's North Africa branch, for the first time claimed responsibility for recent attacks in Tunisia, including an assault on the home of the interior minister.

The May 27 attack on the home of Lotfi Ben Jeddou, in the Kasserine region, killed four security guards.

Officials insist it was a "revenge" attack in response to successes achieved by the security forces in their anti-terrorist campaign.

The authorities have designated Mount Chaambi and neighbouring mountain districts a closed military zone, and warned of the growing threat posed by "terrorist organisations" based there.

Since December 2012, Tunisia's security forces have been battling the jihadists hiding out in the Mount Chaambi and Kef regions, which both straddle the Algerian border, launching a series of major land and air operations.