Connecting The Dots: Tobacco Use, Diabetes, And Tuberculosis 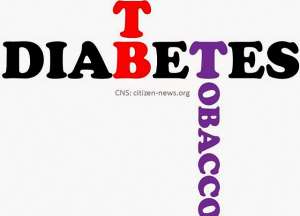 Tobacco related illness kills nearly 6 million people each year, accounting for 1 in 10 of all deaths globally. More than 5.4 million of these deaths are the result of direct tobacco use while more than 600,000 are due to non-smokers being exposed to second-hand smoke. In fact tobacco is a risk factor for 6 of the 8 leading causes of death worldwide. And even as an estimated 1 million Indians die every year from tobacco related diseases, there are around 275 million people in India consuming this poison.

The nexus between tobacco use, diabetes and tuberculosis (TB) cannot be ignored. Dr Anthony Harries, Senior Advisor, International Union Against Tuberculosis and Lung Disease (The Union) cites a study done in Korea last year, which shows that patients with TB who smoked and had diabetes were six times more likely to die than non-smokers and non-diabetes persons. He cautions that, 'In areas where TB prevalence is high, both diabetes and smoking independently increase the risk of getting TB, the risk of relapse even after successfully completing treatment and the risk of dying while on anti-TB treatment.'

According to Dr KS Sachdeva, Additional Director General, Central TB Division, Ministry of Health and Family Welfare, Government of India: as much as 20% of the total disease burden from TB in India can be attributed to tobacco use. He told Citizen News Service - CNS that, 'Studies have shown that TB patients who smoked had much higher mortality rates compared to non-smokers; however, on quitting, their risk reduced substantially. Some focussed studies indicate that deaths due to TB are three to four times higher among ever-smokers than never-smokers. Out of the 700,000 tobacco smoking-related deaths in India every year, an estimated 200,000 deaths occur in those with pulmonary TB due to smoking.'

Dr Sushil Chaturvedi, District TB Officer, Lucknow, said that, 'The immune system of a TB patient is already compromised. If he/she is a tobacco user, it worsens the situation. Also, when a TB patient smokes in a public place he/she will cough more and thus likelihood of infecting others would increase. So ban on smoking in public places indirectly helps in TB control too."

TOBACCO AND DIABETES
Dr Kauser Usman, Associate Professor, Department of Medicine, King George's Medical University warns that tobacco is a major cause for heart disease and cancers. He told CNS that, 'Those suffering from hypertension and/or diabetes are already at a huge risk for heart disease. Tobacco in any form increases this risk further. The nicotine present in tobacco increases insulin resistance in the body and hampers good control of diabetes. We consider diabetes as a cardio vascular disease (CVD), as majority of diabetes patients die because of heart disease. Smoking is one of the major risk factors of CVD. So if a person living with diabetes is a smoker, he/she is much more at risk of heart diseases as compared to a non smoker.'

Dr Rama Kant, WHO Director General's Awardee for Tobacco Control, finds a very strong connection between diabetes and tobacco consumption. He pointed out that, 'In diabetes, most of the blood vessels (like those of limbs and heart) become narrow. If one uses tobacco, then these effects get multiplied. Patients of diabetes who consume tobacco are much more prone to have heart attacks, arterial insufficiency problems and even ocular problems than a normal person. So it is very hazardous for a diabetes patient to smoke at all. Diabetes control requires two things: supervised medical treatment and change in lifestyle wherein comes tobacco. Managing and controlling tobacco addiction is much more difficult than managing diabetes.'

TB AND DIABETES
There is a strong connection between diabetes and TB. Diabetes reduces the immunity of a patient, making him/her more prone to develop infections. TB happens in people who have reduced immunity/poor defence mechanism, (otherwise one can fight the infection). So patients of diabetes are more prone to have TB due to their low immunity.

Dr Sachdeva said that uncontrolled diabetes is associated with delay in sputum culture conversion, increased risk of recurrent TB and increased risk of death. Modelling studies indicate that 15%-20% of all TB patients in India also suffer from diabetes and that diabetes worsens TB treatment outcomes-- increases rates of treatment failure, relapse and death.

He informed that, 'The RNTCP policy is that all TB patients should be screened for diabetes and those found to be living with it must be managed for long term optimal glycaemic control with available resources under the National Programme for Prevention and Control of Cancer, Diabetes, Cardiovascular Diseases and Stroke (NPCDCS). Conversely, all persons with diabetes are to be screened for TB symptoms and those found symptomatic are to be tested for TB. The Central TB Division in collaboration with NPCDCS has already embarked upon screening all TB patients for diabetes in 100 districts, and the programme will soon be expanded to all districts.'

Dr Usman cautioned that, 'TB presents itself differently in people with diabetes. They may not develop fever or cough, but just have uncontrolled blood sugar despite good diabetes treatment. So every doctor should have high index of suspicion of TB in those patients of diabetes who are not responding to diabetes treatment. Hyper glycaemia in TB patients is difficult to control. Once blood sugar is uncontrolled it takes a lot of time to return to normal, so treatment of TB as well as diabetes becomes difficult in such patients. So it is advisable to put diabetes patients with TB on insulin rather than oral medication.'

The caution signal is very clear: Tobacco use in any form is dangerous for health, misleading tactics of tobacco companies notwithstanding.