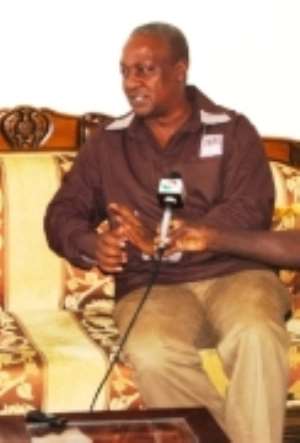 I am sure you would agree with me that all is not well in Ghana. The economy is in a mess. Inflation continues to rise and currently stands among the worse in the whole wide world. Unemployment rates have hit an all time high. Government excesses have resulted in a deficit situation that is frankly alarming. Numerous companies and industries are folding up. Your administration, the Government itself, has signaled of plans to soon lay off workers, hundreds, possibly thousands of Ghanaian workers. Things have never been as bad under this Republic as it has been under you.

The national debt stock is as high as Afadzato and rising. Your consistent twofold solution to the increasingly bitter economic challenges has been- borrowing and taxation. Taxes have been imposed by your administration randomly and in a manner careless of the sentiments of the ordinary Ghanaian. The ordinary Ghanaian has become nothing more than a scapegoat for the Government's reckless expenditure and failed economic policies; a piggy bag from which money can always be drawn.

Our healthcare system is at the verge of collapse. The NHIS has become a fraud your administration is perpetrating on the people of Ghana. A heartless prank, a macabre joke pulled on people who go to our hospitals believing that if they show their NHIS card when they need medical attention they would receive it with no cost to them.

I have witnessed people turned away from hospitals not because their cards were not valid but because your administration's unwillingness to pay service providers has led to many providers pulling out of the otherwise laudable scheme. I remember in particular, the painful sight I encountered a few days ago. A 54 year old woman, visibly in pain, who was told she could not be treated if all she had was an NHIS card. I saw personally her NHIS card and saw that it was valid. I remember seeing a tear drop from her eyes. I shared her anguish and pain. I related to her suffering. Can you Sir?

The unwillingness to pay service providers sir is costing lives. I say unwillingness because you and your appointees like to tell us that the country is not broke; that is there money in the national kitty, the unfortunate state cannot be nothing more than willfulness on your path. What pleasure it serves your good self to subject Ghanaians to this sadistic self is left to everyone's imagination.

In many areas our healthcare system has moved back in time, back to the dark era where quality healthcare was for the rich and privileged, death and pain for the poor. We are back in the days of cash and carry!

We live in Ghana today more miserable than ever Sir. We live in a time characterized by the lawless impunity of your sympathizers, a period of rich selective prosecutions. Justice has no meaning under your watch. Probity has become a complete sham. A pretense, another cant sold to Ghanaians.

We live in a time where simony is the norm because competence has lost its meaning. We watch unmasked the rape and pillage of the national coffers by your brigade of looters and it does not even shame your administration nor are they embarrassed by the universal knowledge of their corruption. Every new scandal motivates them to steal more, to create more expensive scandals.

I strongly believe that things would have been much better if there was less corruption in your administration.

Corruption under your watch has almost reached a state of legitimacy. It has become a virtue while exposing it has been a vice that attracts from your many surrogates attacks and condemnation. I remind your Excellency that Martin BK Amidu was arrested ostenbily on your orders before the elections, as reported by Daily Guide, because he was exposing too much of the rot that was going on in your administration.

You have been intensely relaxed as your high officers and appointees engage in acts of corruption both in public and private.

You have justified acts of corruption which must raise the hair on the skin of every honest person. When one money siphoning scheme is exposed under your watch, you create two to replace it and gift it with some tasty acronym.

Either that or you set, at great expense to the already overburdened taxpayer, a committee consisting of your rich peers and friends who come out with rehearsed reports which you never implement.

But why? When it comes to corruption not even you have lived above reproach; it is still fresh on the minds of Ghanaians the serious allegation made against you by the very much respected Martin BK Amidu.

The uncontroverted allegation stands that the late President caused you to be investigated concerning some deal you undertook in the name of the Republic. That raises eyebrows well enough. Just as it does for the report from that investigation to remain unpublished.

Ghanaians deserve to know the outcome of that investigation.

If the late President Mills whipped us with canes you are whipping us with serpents and scorpions.
Ghanaians are worse off under your watch than they were even two years ago.

The misery index has risen for the poor. Poverty levels are rising and at a fast rate. Patriotism is at an all time low and for good reason, there is no example to follow with regards to patriotism when one looks at your Government. The misery index continues to rise for many other Ghanaians dedicated to decent and honest living.

The hopelessness Ghanaians are in transcends regional and ethnic boundaries. From Avenor-Ave to Zabzegu,Afigya to Mion, Tallensi to Ahanta, the people, the people you promised a Better Ghana are crying.

Your Excellency, the promissory note that you issued to Ghanaians in 2012 assuring us of a 'Better Ghana' has been bounced like your administration's check to her debtors. It has been dishonored. It is a bad check that cannot be redeemed. There are insufficient funds of integrity, honesty, patriotism, truthfulness in the account of your administration for the check to be honored. There is nothing that you can do for Ghana except destroy it further. It is morally wrong Sir for you to continue to stay in office. You should resign.

You have breached the spirit of the oath that you took in January, 2013. You do not represent the concept or person the framers of our Constitution envisaged when they spoke of a 'President'.

Resign Sir! Take a pilgrim to some holy land and seek for penance! Wear not your expensive garments on the way but wear something ordinary, reflecting the current moral poverty of your administration.

Save the country the hardship. Save us from further dipping into the abyss. Let what is left of patriotism in you Sir, move you to consider the plight that Ghanaians go through every second you remain in power and do what is right!

How can you blame NDC for Akufo-Addo’s “away away!” humiliat...
16 minutes ago