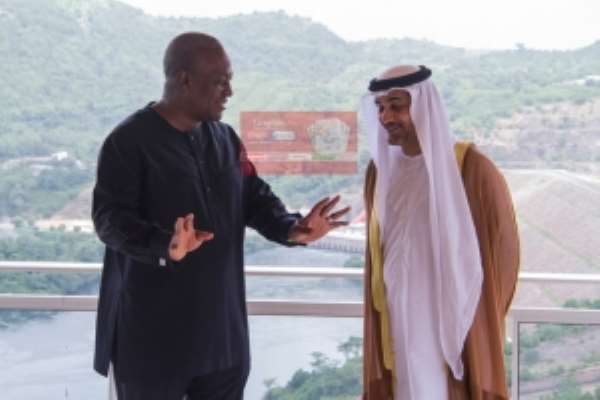 The Abu Dhabi Development Fund has extended a grant of $100 million to the government of Ghana to undertake infrastructural development.

This came up when the Deputy Minister of Economic Affairs of the United Arab Emirates (UAE), Sheikh Al Gaith, and some investors from the oil-rich country paid a courtesy call on the President, Mr John Dramani Mahama, at the Presidential Villa at Akosombo in the Eastern Region Wednesday.

The meeting with the UAE team was a follow-up to a similar one which President Mahama held with UAE officials in Abu Dhabi in February this year which discussed a number of projects in Ghana.

The Akosombo meeting also discussed the expansion of the ports, as well as mining, agriculture and aviation where employment and economic expansion opportunities could be generated for the country.

Mr Malor said a memorandum of understanding (MoU) was signed between the two countries, under which the UAE pledged to support the development of 350 megawatts of a new combined-cycle power plant in the Western Region.

Apart from generating electricity, the plant will produce 100,000 cubic metres of  water per day

The project is to be undertaken by TAQA, which is already working on a thermal project in the Western Region.

Mr Malor said the energy project was consistent with President Mahama's vision to work towards doubling Ghana's power generation by the end of 2016. Mining

He also stated that the discussions at Akosombo had looked at how to advance mining in Ghana.

One of the major projects on the cards is bauxite mining at Nhinahin in the Ashanti Region. Aviation

On aviation, Mr Malor said President Mahama told his guests about the potential in the sector in Ghana and urged investors in the UAE to explore the sector.

The Presidential Spokesman, who is also the Director of Communications at the Presidency, said President Mahama mentioned the fact that domestic air passenger travel had seen a significant improvement over the last few years and that any investment in that sector would achieve results. Meeting with Mauritius Deputy Prime Minister

Mr Mahama said Ghana and Mauritius were looking at signing bilateral trade agreements with the view to creating a conducive trade environment between the two countries.

He said Mauritius had comparative advantage in many sectors, including sugar and garment production, and indicated that there were other areas such as the tourism sector where the two countries could work together. Prime Minister

Mr Duval said his visit was to reciprocate a similar one by Mr Mahama to Mauritius and commended the President for his hard work that had brought hope to Ghana's economy in the short to medium term.

He described the President as "an example for many of us in Africa".

He said Mauritius was opening a new chapter in its development with Ghana this year which would be a win-win affair.

Mr Duval said the fact that he was in Ghana with 25 of the top business people in Mauritius attested to the desire to strengthen development cooperation with Ghana.

He said Mauritian investors were desirous of investing in Ghana because of the stability, growth and peace in the country.