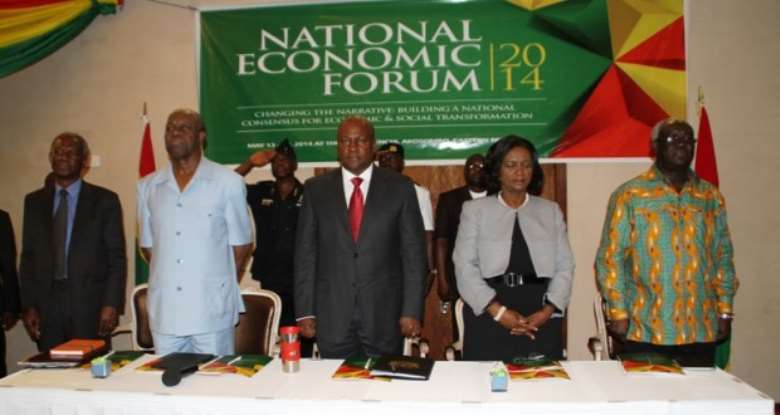 You won't believe me if I told you why I was happy the Senchi Economic Forum, happened near Akosombo: I had hoped that the Tilapia served at the forum, would have had some electricity passing through them, so the high profile participants would have had their brain powers (not Aryittey Powers), electrically charged, for optimal strategic creativity during the deliberations. Was I right?

So, a communique has been issued from the Senchi Economic Forum. I am happy it all happened, but again I have bigger picture questions:

More than half of the issues that came up and issued in the 22-point communique are NOT new to us. The national administrators have known them; their economic consultants have always told them; the international community have warned us severally about them. The real questions are (i) Why were they never taken care of when we first knew about them (ii) what mechanism do we have in place now, to ensure that in the future, things do not have to deteriorate for another Senchi episode, before we DEAL with our obvious problems?

I have read many asking what was madam Akua Donkor doing at the Economic Forum. Well I also have a couple of questions (i) On what basis do we assume that rounding together a number of PhD holders alone will provide the best solutions for Ghana and what have we done to ensure that in the future, “REAL LIFE” people who have achieved successes in the midst of National Economic whirlwinds are involved in these contexts? Why not. In my opinion, she earned being there – I don't know about the others. And if Ms Donkor ever gets question on this, she should ask back what each of the other participants have achieved for themselves outside politics. (ii) Why was the forum only full of so called “Economic brains” that were the same brains existing before and during the economic mess? Are these not the same folks who were individually or collectively advising our successive governments? What new refreshing “out-of-the-box-syllabus” economic strategies have they really offered?

I may not have a PhD in EconoSenchi yet, but I am glad neither does Ms Donkor, so I am not alone. And since I wasn't there, I can only judge from the communique in the public domain. The truth is, we have missed something really big in the thinking that went into that communique and here is what we missed (and those who attended my recent symposium in Ghana will understand): The world is moving at an alarmingly fast rate. That speed is engineered by Information, Technology and Creativity. The speed, the complexities and the evolutions in technologies will not slow down, rather, they will increase, become more consolidated and more complex. This is NOT prophecy, it's something called REALITY. The second point of the communique talks about long term National interests. Well, sirs and madam, since Ghana is not an isolated island and since we will need to engage with the rest of the world in order to be successful, we cannot be too far behind wholesomely embracing Technology and Information and to create educational environments that co-strengthen the former two. The real geography of the world today is NOT about land mass, weather, ecology, natural resources and population distribution etc – it is a geography of Information and Technology distribution and until we embrace these 2 and consciously speed them into our governance, business and educational environments (I said consciously), and make them THE DRIVING FORCES of long term national development, then we can expect this economy to repeat these cycles of economic turmoil over and over and over again for one and only one reason – everything about our economy, is operating at a lower information frequency to that of the world we are engaged with. It's a shame, neither of these formed part of the Senchi-22 ideological buffet!

For those who claim to be the economic brains running this country, here is a new economic concept I recommend you swallow, as dessert for your Senchi dinner. I know it doesn't form part of your old economic textbooks so, do read it carefully:

The strength of the economy of each country in the world today, and its reflection in her currency and so called economic indicators is directly proportional to that country's location on the new age development spectrum – where spectrum is a combination of Information, Technology, Innovation and Education (none of which featured as a focal point on the catch-22 communique list). As far as I can tell – if everything is equally important, then nothing is really important. There is nothing expressed on the communique, that indicates that there is at least one core underlying driving force that is in sync with the 4 main forces driving the rest of the world today.

No further questions for this witness your honour