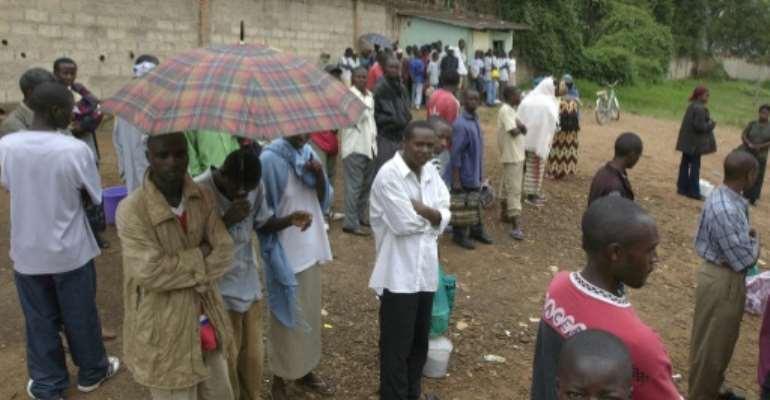 The detention centre in the capital Kigali, named Gikondo, reflects an "unofficial policy of keeping people the authorities consider 'undesirable' away from the public eye," HRW say. By Jose Cendon (AFP/File)

Kigali (AFP) - Rwanda's government was accused Thursday by a rights group of rounding up "undesirables" including beggars and prostitutes and holding them in a grim centre to promote the capital's clean image.

Kigali however dismissed the report by Human Rights Watch (HRW), with authorities saying the centre was supporting alcoholics and drug users.

"Rwandan authorities are arbitrarily arresting and unlawfully holding some of the country's most vulnerable people in an unofficial detention centre," HRW said, estimating "several thousand" people are likely to have passed through the centre since 2011.

The centre in the capital Kigali, named Gikondo, reflects an "unofficial policy of keeping people the authorities consider 'undesirable' away from the public eye," HRW said, adding that until last year, street children were also placed there.

The report, "Why Not Call This Place a Prison?", based on interviews with 57 former detainees, details rooms holding up to 400 people, with people held in "deplorable conditions for periods ranging from a few days to several months, without charge."

Rwanda's government however dismissed the claims, telling HRW it was "not a detention centre, but exists to provide rehabilitation in the form of social emergency assistance and is a transit point to other rehabilitation centres."

Kigali's mayor Fidele Ndayisaba told AFP it is "not a detention centre, not a prison," but rather a centre to support alcoholics or drug users.

Kigali has earned a reputation among African capitals for its unusually ordered and clean streets.

HRW however said that came at a price.

"Kigali is often praised for its cleanliness and tidiness, but its poorest residents have been paying the price for this positive image," HRW Africa chief Daniel Bekele said.

"The contrast between the immaculate streets of central Kigali and the filthy conditions in Gikondo couldn't be starker."