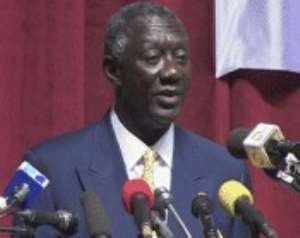 While predicting a "major shift forward" in income levels in Ghana as a result of private sector development, he said the continent would require more financial assistance as well as market access to move into the international mainstream.

"You don't put a bantamweight against a heavyweight in the ring," said Mr Kufuor, a British-educated lawyer and former athlete. "If you do that you are sending the bantamweight to slaughter, and it's the same with the market. To help build the muscle, Africa needs aid as well as trade."

In an interview with the Financial Times, he said awareness of Africa's transitional needs was increasing among the leading developed economies, but "not as fast as we would wish". His comments follow a World Bank report this month indicating that aid flows to most African countries were well below the level required to meet United Nations development goals by 2015.

Mr Kufuor, who yesterday held talks with Tony Blair, prime minister, was hopeful that the New Partnership for Africa's Development (Nepad) would change attitudes both inside the continent and among outside partners.

The programme would enable African countries to learn by example about the benefits accruing from better governance, he said. Ghana is due shortly to become the first country to submit to a "peer review" under the Nepad programme.

The Ghanaian president, who is also the current chairman of West Africa's 16-nation Ecowas grouping, voiced optimism about the restoration of stability in neighbouring Ivory Coast. "I believe the prospects there are improving," he said.

The new UN peacekeeping force of more than 6,000 would enable political leaders to canvass support across the country for the peace deal agreed in France 15 months ago. Ecowas's "firefighting" force of 1,300 soldiers, sent last year to join French troops in the country and now incorporated into the new UN operation, had been unable to secure the whole country. The north and west of Ivory Coast remain under rebel control and rebel and opposition groups have suspended their participation in the reconciliation government. However, Mr Kufuor said he did not yet want to consider changing plans for staging elections there next year.

"Anything destabilising there naturally threatens the situation in Ghana," he warned. "The entire sub-region is fraught with porous borders for small arms trafficking and also mercenary movement." He said it was time that Ecowas reverted to its original concept as an economic organisation, aimed at creating a common market of 250m people in the region.

Ghana, he said, was close to becoming the first country to meet the convergence criteria for a planned monetary union with Nigeria, Sierra Leone, Gambia and Guinea. The union is supposed to be in place by July next year and subsequently to merge with the CFA franc zone into a single currency area.

Inflation in Ghana was on the threshold of coming down into single digits, compared with over 40 per cent when he took office three years ago.

Mr Kufuor faces elections in December at the end of his first four-year term.

By diversifying the economy, Mr Kufuor said, Ghana should be able to lift its average income from about Dollars 400 to Dollars 1,000 a year, in constant terms, within a decade.

"This, within the sub-region where we are, would be a major step forward."