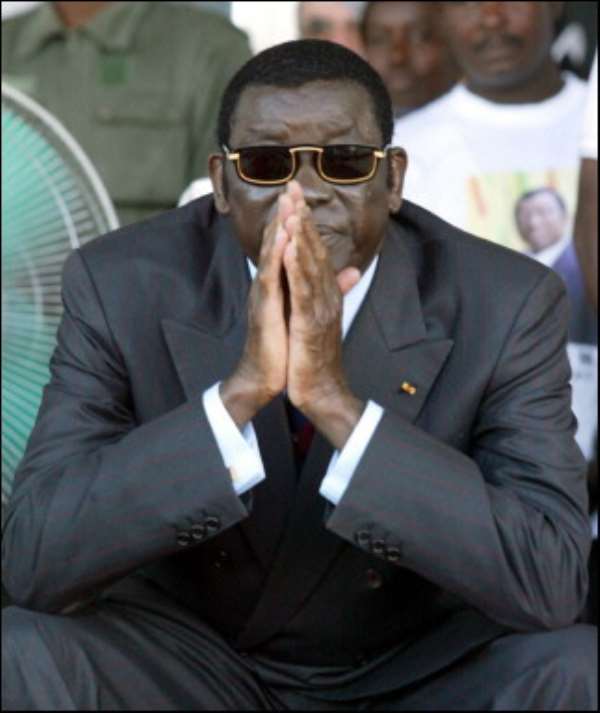 Wonders will never end, they say. For several hours, doubting thomases and credulous Togolese all got glued to the seats behind their TV sets, starry-eyed, as a delegation of penitent fetish priests from the local voodoo Anyigbaton Hunorgah fetish shrine of Klikor in the Volta Region of Ghana was shown making a pilgrimage to Lome, begging President Eyadema to free them from a demonic curse.

The curse was believed to have been imposed on them after a spiritual ritual they claimed they had indulged in to kill President Eyadema, allegedly backfired.

The delegation of fetish priests lumbered forlornly to the private residence of the Togolese Head of State in Lome last week to express their sincere apologies and mea culpa to President Eyadema for performing those spiritual rituals against him, under political inducement.

Looking remorseful, the fetish priests, led by Togbui Soglohogah Amewuda Akumey, narrated how two well known Togolese opposition leaders had come to their shrine in Ghana to offer them some drinks and large sums of monies for the sole purpose of “the spiritual killing” of President Gnassingbe Eyadema of Togo.

The fetish priests said the two opposition leaders told them how several efforts made in the past by the opposition groups, materially, physically and spiritually to remove Eyadema from power had failed to work.

As a result, Togbui Soglohogah said the fetish priests agreed to the demand and prepared rituals by invoking the powers of their vodou or fetish grove to spiritually terminate the life of the Togolese leader.

Togbui Soglohogah confessed that the fetish grove fired deadly occult missiles to kill President Eyadema after which they buried him spiritually in a coffin.

While they eagerly awaited the physical death of their target, Togbui Soglohogah told pressmen that their own plight mysteriously turned into a nightmare.

He said that instead of the news about Eyadema's death, their rituals boomeranged and backfired into the nightmare of fatalities in which their children began to die, strangely one after the other every other day.

“Since we performed the rituals to kill President Eyadema, our families have never known peace, with our children dying one after the other,” he said regretfully.

The fetish priests said after they had consulted the oracle of the fetish grove, it was revealed to them that the calamity would keep ravaging their two communities unless they came to Togo to seek forgiveness from the innocent man whose soul they had tried so capture spiritually but failed.

The whole delegation of fetish priests spoke with trembling voices, looking frightened as they begged President Eyadema for pardon.

The Togolese leader menwhile, looked on unamused but with a sense of deep reflection and in the true spirit of compassion without saying much.

“We are now finally relieved after we have begged President Eyadema for absolute pardon”, the Chief fetish priest said.

A close aide to the Togolese President responded with the maxim that, “To err is human but to forgive is Divine.”

So far, it is not yet known whether the mysterious deaths which occurred in the communities of the fetish priests in Ghana have stopped since they came to Togo to supplicate for forgiveness.

We must tackle poverty as national security threat – Parliam...
58 minutes ago