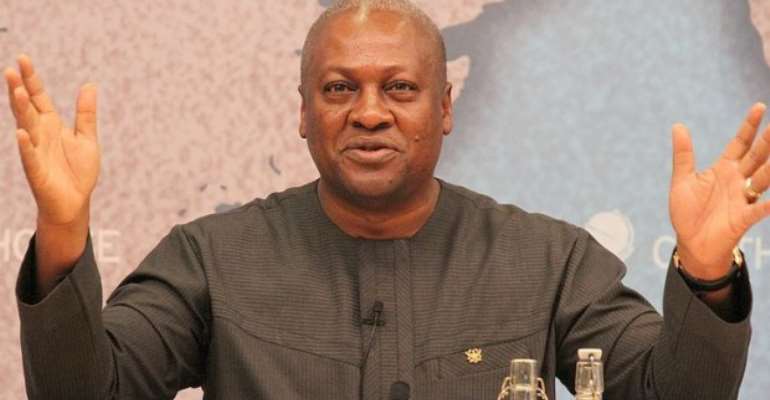 President John Mahama Confronted with a barrage of criticisms over the ethnocentric comments made by President John Dramani Mahama during his recent visit to the Ashanti Region, government yesterday claimed that the voice of the President on the tape recording making the offensive comments was doctored.

The Deputy Minister of Information and Media Relations, Felix Kwakye Ofosu, last night vehemently denied what has been claimed to be a recorded voice of the President, and instead issued what he described as the 'true recording' of the President's voice at a rally in Kumasi.

Strangely, the new recording appears to have been acoustically treated, with all the surrounding noises taken out of the audio – depicting a cleverly edited recording.

The government's information outfit has been compelled by public outcry to defend the President's recent comments in Kumasi, which were thought to be ethnocentric in nature and offensive to the people of the Garden City.

During his tour of the Ashanti Region last week, Mr. Mahama was quoted by radio stations to have said at a rally of National Democratic Congress (NDC) supporters that, 'The presidency is working hard so don't allow anyone to deceive you into thinking that we are retrogressing. As I speak, there are several projects ongoing. We are constructing roads, providing water and electricity. Since I came, we have inspected ongoing renovation works on the runway of the Kumasi Airport. We are fixing instruments at the Airport to allow for both day and night flights. We have also inspected the GIHOC Shoe Factory where there are new machines for producing footwear for the military here in Kumasi.'

The Offensive Statement 'However the Akans have a saying that the chicken never pleases the hawk, no matter how well she dances. But that shouldn't discourage us. We have noted the promise we made to Ghanaians for which we were voted into power. As for Kumasi, even if we construct roads tarred with gold, they will tell us that we did nothing.'

The media played out the President's voice as recorded, amidst the blowing of vuvuzelas by ecstatic crowd of NDC supporters, but that could not be heard in the Kwakye Ofosu version of the recording.

The comment has since stoked a heated debate across the country with most people in Kumasi feeling looked down upon by the President.

Denial The statement, which was signed by Mr Kwakye Ofosu and not the substantive Minister, Mahama Ayariga, made matters worse by trying to justify the earlier statement. It stated: 'He (the President) only referred to his detractors who have made it their stock in trade never to appreciate the good works of this government but resort to deliberate cynicism, unfounded pessimism and outright calumny to create the impression of a collapsed state.'

Defence Felix quoted what he described as 'a transcript of the relevant portion of the original recording' in which he was reported to have said '…the Akans have a saying that, no matter how well the chicken dances, it will never please the hawk. Therefore, we need not be discouraged by that. Because for some people, even if we cover all the ground with gold in Kumasi, they will not appreciate it.'

This supposedly edited version of the President's speech according to the Deputy Minister, 'creates the impression that he has singled out the people of Kumasi for criticism when in fact, it can be clearly determined from the original recording that the President was making reference to cynics in general.'

Justification Apart from that, he indicated 'there was also no tribal or ethnic undertone to the statement as has been claimed by the purveyors of this mischief.'

Kwakye Ofosu insisted that 'the broadcast of the doctored tape and the illogical claims made about President Mahama's trip to the Ashanti Region form part of a grand effort to water down the huge success chalked.'

But Member of Parliament for Bosomtwe in the Ashanti Region, Simon Osei Mensah, described the President's comments as 'quite unfortunate'.

Issues 'For me, it's an insult to all Ghanaians because it's not only Ashantis that are complaining; all over the country people are complaining about the hardship in the country and if he talks about development projects, how many has he mentioned? And the shoe factory that he is talking about, what is the production capacity? How many workers are they employing, as if it's a gigantic project,' he remarked in an interview with DAILY GUIDE.

He recalled a similar gaffe by President Mahama during his recent tour of parts of the Eastern Region in which he described Kyebi as the 'headquarters of 'galamsey'' (illegal mining), creating a huge public outcry and compelling chiefs in the area to demand an unqualified apology from him.

Up till now the President has not apologized, even though galamsey operators have also invaded his Bole hometown, making mess of the area.

Worry 'So if you have a party's stronghold and they don't vote massively for your party, does that mean the people are unappreciative?' he asked rhetorically, since according to him, 'If you start to do something good for us, people will appreciate it.'

Mr. Baako said the comment was 'baseless and unpresidential.'

He was speaking on Peace FM's Kokrokoo morning show on Wednesday.

The Information Minister, Mahama Ayariga, on Tuesday evening, justified the President's comments in an interview with Joy FM.

Kweku Baako Jnr said he would not give an “escape route” for anybody to come and tell Ghanaians that the President did not mention Ashantis in his comments.

He said for the President to segregate a particular community, no matter which ethnic group, and accuse them of being ungrateful is offensive, and “negative communication.”

The comments “coming from a President who is delivering goods and services… There is even no basis for it,” he pointed out.